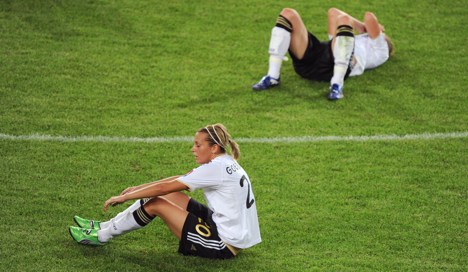 Hosts and defending champions Germany crashed out of the women’s World Cup on Saturday when they were floored by an extra-time goal from Japan who will now meet Sweden in the semi-final in Frankfurt on Wednesday.

Having won the bronze medal at the Beijing Olympic Games in 2008, Germany’s defeat to Japan has also cost them a ticket to the London Olympics.

Sweden’s 3-1 win over Australia in Sunday’s quarter-final at the women’s World Cup means they join France and Japan in the last four.

The Swedes and French now qualify to compete at the women’s football tournament for London 2012 as the best two European teams from the women’s World Cup while England, who lost to France, qualify automatically as the hosts.

But Germany coach Silvia Neid said the Germans’ absence from London will give them more time to prepare for Euro 2013 to be held by Sweden.

“This means that we are now have one and a half years time to prepare for the European Championship in 2013,” said Neid, with Germany as defending European champions.

won’t be at the Olympics won’t harm the development of women’s football here.”

German Chancellor Angela Merkel on Monday made a show support for Neid and the players despite their premature exit from the tournament.

“I called Silvia Neid and thanked her and the team for all the joy they’ve given us,” she told the weekly Sport Bild. “I’m extremely sorry for the players and the entire staff that that it wasn’t enough in the end.”

But Merkel said she was confident Germany’s women footballers would bounce back.

“That’s how it is in sport, after a period of hopefully not too long disappointment, new goals will be set. And we fans will support them just the same as before,” she said.