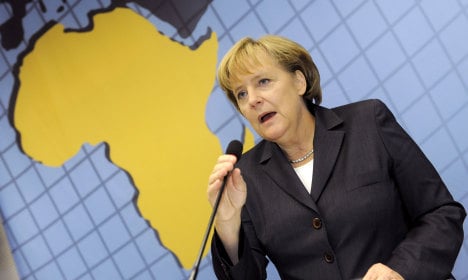 A group of German business leaders will join Merkel on a two-day trip to Kenya, Nigeria and Angola from Tuesday, her second Africa tour since becoming chancellor in 2005.

“I want to show that Germany takes very seriously the development of the African continent,” Merkel said in a weekly statement published on her office’s website Saturday.

In Kenya, Merkel is scheduled to meet President Mwai Kibaki, and plans to promote renewable energy, an area where Germany is a world leader.

The chancellor will discuss cooperation in the raw material sector in Angola, a country that relies heavily on petroleum exports, the statement said.

Angola’s blooming oil industry has helped the country establish one of the highest annual economic growth rates in Africa.

Merkel, who is set to return to Germany on Thursday, will also meet with Nigerian President Goodluck Jonathan.

A source within Merkel’s office said some economic cooperation agreements would be signed on the trip.

The German leader is also expected to discuss reforms on the UN Security Council, where Africa is lobbying for two permanent seats.