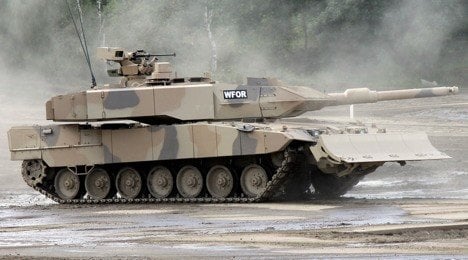 Chancellor Merkel told broadcaster Sat.1 that Saudi Arabia was a country of “major strategic significance,” despite “substantial shortcomings in the human rights arena.”

The government has come under fire since reports emerged that Berlin had approved the sale of 200 Leopard tanks to Saudi Arabia. The lucrative deal would reverse Germany’s long-standing policy not to supply heavy weaponry to the country.

Without confirming the tank deal, the German defence minister echoed Merkel’s comments on Saudi Arabia’s “stabilising and moderating role in the region,” particularly in light of its shared border with politically unstable Yemen.

In an interview with German daily Hamburger Abendblatt, de Maizière described Saudi Arabia as an “ally of the West.”

“Saudi Arabia is one of the most important anchors of stability in the region,” de Maizière said, all the while acknowledging that the country did not meet Germany’s standards of free and democratic governance.

De Maizière also hit back at the political opposition, which has heaped criticism on Merkel’s government since details of the arms deal emerged.

“The SPD and Greens, who are up in arms about an arms deal, handled things the same way when they were in government,” he told Hamburger Abendblatt. “I would advise the Social Democrats, in particular, to be careful when they criticise what we do.”

But opposition politicians aren’t the only ones who are unhappy about the deal. Horst Teltschik, a former advisor to conservative chancellor Helmut Kohl, took issue with the description of Saudi Arabia as a source of regional stability.

“I consider the current situation in Saudi Arabia to be unstable,” he told broadcaster ZDF on Friday. “The entire region is in turmoil.”

Teltschik also criticised the government’s refusal to comment on the deal, saying that if the reports are true, it would be something that officials couldn’t keep secret.

“The government would then have to make it public and justify why they made this kind of decision,” he said.