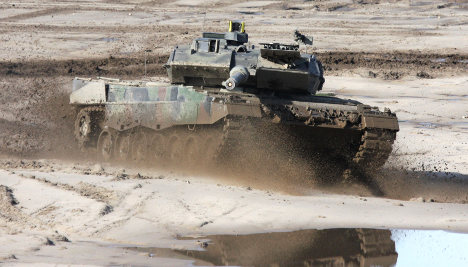 Ströbele, a member of the Bundestag’s foreign affairs committee and a former member of the 1999 inquiry into the Christian Democratic Union (CDU) donation scandal, which involved kickbacks on armoured vehicle sales to the Arab kingdom, said similar payments may be part of the latest tank deal.

Chancellor Angela Merkel’s cabinet security council has reportedly given the green light for the sale of 200 Leopard II tanks to Saudi Arabia, a U-turn on Germany’s two-decade policy of not selling heavy weaponry to the country because of its doubtful human rights record and concerns about Israeli security.

In an interview published Thursday in the daily Süddeutsche Zeitung, Ströbele referred to the payment of at least 1 million Deutsche marks as a kickback on the sale of 36 Fuchs armoured personnel carriers that Germany supplied to Saudi Arabia in 1991. The money went into the coffers of the then CDU treasurer Walther Leisler Kiep, he said.

“A large part of this money flowed back to a Saudi Arabian beneficiary as a so-called kickback,” he continued. “We know that this is no rare exception in arms deals to Saudi Arabia. Therefore I assume that very substantial user expenses could have played a role in the current tank deal as well. Although I have no evidence of it.”

Kiep was convicted of perjury over his role in the donations scandal after it emerged he had received undeclared money from Karlheinz Schreiber, who has himself been jailed over the affair.

Opposition parties and even prominent members of Merkel’s own CDU and their ruling coalition partners the Free Democratic Party have expressed outrage of the deal because of Saudi Arabia’s recent role in suppressing the democratic movement in neighbouring Bahrain during the so-called Arab Spring.

Ströbele’s Greens said on Thursday they would file a lawsuit against unnamed executives at the tank manufacturer Krauss-Maffei Wegmann in a move to force the German government to shed light on the matter.

A parliamentary whip, Volker Beck, told Süddeutsche Zeitung that the suit was based on suspicion that selling the tanks to Riyadh would violate arms export laws.

Meanwhile, a top Israeli official said he was unaware of the German-Saudi deal but added that he had complete confidence in the German government. The remarks are significant because Israel’s security has been a factor in Germany’s previous refusal to sell heavy weapons to Saudi Arabia and therefore indicates the Jewish state’s changing strategic considerations amid the Arab uprisings.

While a German newspaper said this week that both Israel and the United States had signed off before the final decision was made on June 27, Israeli deputy foreign minister Daniel Ayalon said he did not know of a purchase.

“First let me stress that I am unaware of an upcoming tank deal between Germany and Saudi Arabia,” he told the German daily Die Welt. “It is in the nature of such matters that one does not speak about them publicly. But I can assure you that we fully and completely trust Germany’s government.”