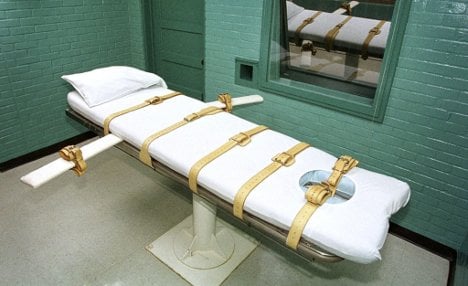 Rais Bhuiyan long ago forgave Mark Ströman, the man who in 11 years ago nearly shot him dead at a petrol station in Dallas, Texas.

But the 37-year-old had a message for Germany while visiting Berlin this week: Don’t let Ströman die.

On July 20, Ströman is scheduled to be executed by the state of Texas for killing an Indian man during a robbery a few weeks after Bhuiyan was shot in September 2001.

But his supporters are hoping an international outcry could prompt the Texas governor or courts to reconsider whether Ströman should be killed.

The protest, they say, should include the German government because of Ströman’s ties to Germany – where his father came from.

They want the government to grant Ströman German citizenship and advocate forcefully for him. But it’s Bhuiyan who is really leading the charge.

He’s circled the United States to call for mercy and is now on a last-ditch tour of Europe to try to get governments here to do something, anything to stop the execution.

The odds aren’t good – Texas has largely ignored foreign pressure against the death penalty in the past. But Bhuiyan is relentless.

A brush with death

The shooting happened in a few quick seconds, Bhuiyan remembers. Ströman stormed into the petrol station, carrying a gun. Bhuiyan, figured it was a robbery.

But then came the question: “Where are you from?”

As Ströman fired, the blast from the shotgun scattered more than 30 pellets across Bhuiyan’s face and head.

Blinded in his right eye and bleeding, he pretended to play dead as, in his head, he recited prayers from the Koran.

After he was apprehended, Ströman said he had shot Bhuiyan and murdered two other men he thought were Middle Eastern in a racist rage following the September 11 2001 terrorist attacks. But though Ströman was arrested and sentenced to death, it didn’t end the pain for Bhuiyan, who endured years of plastic surgery and was told by doctors that he would never see again in his right eye.

Still, he found peace, relying on his Muslim faith.

“I decided that his is a human life, like anyone else’s,” Bhuiyan said. “I decided I wanted to do something about this.”

Last year, he decided to take action. He wants to give Ströman the compassion that he did not provide his victims.

A race against time

Ströman’s supporters know they’re in a race against time. But they hope Germany’s clout might make a difference.

But the chairman of the Bundestag’s Committee on Human Rights said Wednesday he was calling on the Texas government to stop the execution.

“We’ve written letters to the governor and not gotten a response” said Tom Koenigs. “We’re trying to make contact with them. This is about human rights and we have a mission to promote these values.”

Did he really think the execution could be stopped?

“I do absolutely believe it,” he said. “It may not have happened in the past, but it can happen now.”