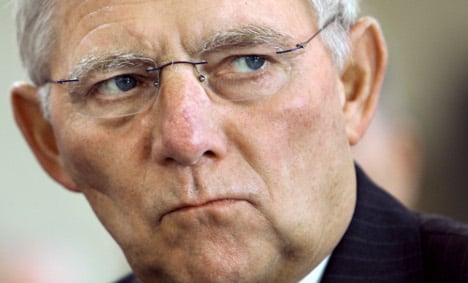 “We must break the oligopoly of the ratings agencies,” he told a news conference, a day after Moody’s Investors Service downgraded Portugal’s debt to speculative status.

“I cannot understand what this appreciation is based on,” Schäuble said, referring to the influence the ratings agency have on financial markets, adding that he was “surprised like everyone” by the decision.

Moody’s slashed its credit rating on debt-ridden Portugal by four notches to Ba2 from Baa1, warning it could be lowered further.

Fellow European partners, together with the International Monetary Fund and the European Central Bank, have put together rescue packages for Portugal, Ireland and Greece to help them out of the quicksand of their spiralling sovereign debt.

German Chancellor Angela Merkel, for her part, on Tuesday demanded that ratings agencies take a back seat to the IMF, the ECB and the European Commission in determining the fate of heavily indebted Greece.

“I think it’s important that we in the Troika – the International Monetary Fund, the European Central Bank and the European Commission – don’t allow ourselves to relinquish our freedom to judge,” she told reporters at a news conference.

“That’s why I trust in the evaluations of these three institutions when it comes to specific procedures” rather than those of rating agencies, she said.

This followed a warning by Standard & Poor’s saying current proposals for a second Greek bailout could constitute an effective default.

“There are about 100 ratings agencies in the world. The importance given to the big three comes from the fact they have proven to be accurate in their ratings” issued over many years, he said.

Earlier in the day, Greek Foreign Minister Stavros Lambridinis had also attacked what he termed the “madness” of ratings agencies saying they exacerbated an already difficult situation.

Speaking during a visit to Berlin, he said a decision this week by ratings agency Moody’s to downgrade Portuguese debt was not based on any failure to implement economic reforms by the government in Lisbon.

The downgrading reflected rather “the assumption that Portugal would need a second bailout,” he said. This had “the wonderful madness of self-fulfilling prophecy” by aggravating Portugal’s fiscal straits, he added.

He also accused market players of undermining his own debt-saddled country by betting on a default.

“Unfortunately a lot of people in these ‘rational’ markets have invested billions of euros in (a) Greek collapse,” he said.

“The timing of Moody’s decision is not only questionable but also based on absolutely hypothetical scenarios which are not in line at all with the economic programme” adopted by Lisbon, said Amadeu Altafaj, commission spokesman for economic affairs.