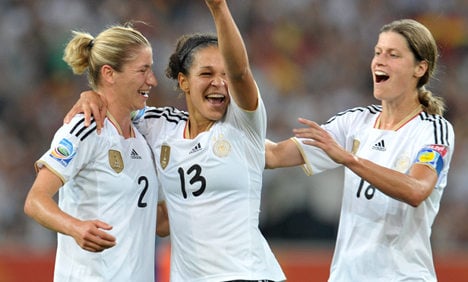 But both coaches were furious with Finnish referee Kirsi Heikkinen who handed our five yellow cards in addition to Sapowicz’s red after a dangerous tackle on Fatmire Bajramaj.

“I think it was overdone,” said Germany coach Silvia Neid. “Bruno Bini (France coach) got really worked up because he got three yellow and one red. You didn’t dare to do anything after that. I think it was too much.”

Bini added: “The first two yellow cards, the players were just playing the ball which is what they do. If you apply her (referee) logic there should be 20 yellow cards in a game.”

Both teams were already qualified for the last eight with two-time defending champions Germany next meeting Japan, who finished second in Group B after losing 2-0 to England in Augsburg.

The Germans made most of the early running in a tense first half on front of a sell-out crowd of 45,000.

Skipper Garefrekes broke the deadlock after 25 minutes when the Frankfurt midfielder rose highest to pick up a freekick and head in her second goal of the tournament.

Six minutes later the hosts were 2-0 up after Duisburg striker Grings latched on to a Simone Laudehr cross to head into goal.

France were however transformed in the second half with substitute Delie getting one back after 56 minutes heading in a Sandrine Soubeyrand corner just a minute after her earlier effort had been held by goalie Nadine Angerer.

A Grings free-kick on 60 minutes was held by Sapowicz, but minutes later the Paris Saint Germain goalie was sent off for a dangerous tackle as Bajramaj raced towards goal with the Turbine Potsdam midfielder stretchered off.

Sapowicz was replaced by Celine Deville and Grings stepped up to convert the penalty on 68 minutes.

Four minutes later Georges reduced the deficit with a powerful header off a corner, and moments later they were almost levelled as Delie shot just wide from inside the box.

In the dying minutes of the game a Grings free-kick hit the side-netting, and a Bajramaj effort was cleared off the line, before Okoyino da Mbabi put the result beyond a doubt a minute from time.

Neid said her side were just beginning to relax after difficult wins against Nigeria (1-0) and Canada (2-1).

“I think they feel really liberated now,” she said. “From the beginning they showed how they really like playing and how they really wanted to win the game. It was really fantastic and that’s a compliment I’ve already paid my team.”

Bini added: “We had a timid first half. We made it very difficult for ourselves. We couldn’t really show what we wanted to show. Today we really had to draw on all our resources. Playing at home is a totally different story.”

Germany top Group A with a maximum nine points with France second with six, Nigeria on three and Canada zero.