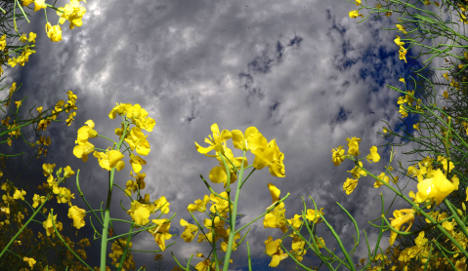 The DWD’s forecast sums up the week as “mostly summery-warm, sometimes sunny, also with showers and storms at times,” with average highs topping 25 degrees Celsius.

DWD meteorologist Ansgar Engel said in a statement that the “warm, but not always stable weather” was expected to continue into the weekend under the influence of low pressure system “Kurt,” which is currently parked over the British Isles and should make Germany’s weather a “done deal” for the coming days.

Tuesday afternoon would be marked by heavy cloud from the northern state of Schleswig-Holstein down to the Fichterlgebirge mountain range in Bavaria, with some rain.

Much of the east of the country should be sunny and mostly dry Tuesday afternoon, though the west and south would see changeable sunny and cloudy skies. Scattered showers were expected in the southeast.

Along coastal areas high temperatures should reach about 20 degrees, though the rest of the country will enjoy warmer conditions from 22 to 28 degrees with light breezes.

Overnight, skies will be clear in many areas with only light cloud in others, though thicker cloud cover will move across the west by morning. Temperatures will drop to between 10 and 16 degrees.

High temperatures will reach about 22 degrees in the west and 28 degrees to the east and south.

Scattered showers will continue into the evening, especially in the northeast and south, though other parts of the country can expect the cloud to become less widespread and even clear up completely.

Thursday is expected to be changeable, with heavy clouds in the south. Scattered showers and storms are expected in the northern half of the country, with highs ranging from 21 to 27 degrees, peaking at 28 degrees in the southeast.

Overnight thunder and rain are expected in the south and east, though showers are expected to generally ease off across the country. Low temperatures will range from 11 to 17 degrees.

Friday will be changeable, with sunny periods switching with showers, particularly in the northeast and south. Highs will range from 22 to 28 degrees.