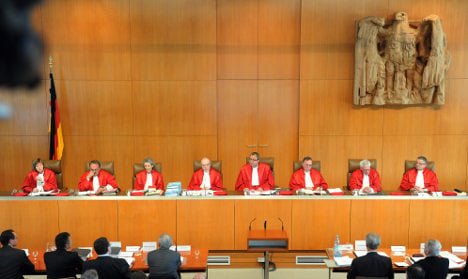 An adverse ruling could potentially call into question plans for a permanent EU bailout mechanism but most expect Germany to continue its payments, in line with arguments by Finance Minister Wolfgang Schäuble, who testified in person.

Given popular discontent in Germany against eurozone bailouts, others in the 17-nation bloc will follow the proceedings closely to determine how much leeway Chancellor Angela Merkel has to commit to future EU rescue plans.

Lawmakers in the Bundestag, or lower house of parliament, including within the ruling conservative coalition, have become outspoken opponents of additional aid for countries they see as having flouted EU rules without any consideration of the consequence.

For the critics, Berlin’s involvement in the debt rescue plan violates the German Constitution by undercutting parliament’s rights to review and determine the national budget.

Chief Judge Andreas Vosskuhle stressed Tuesday that he did not seek to determine whether Germany was obliged to help save Greece but rather to “define limits that the law imposes on politicians.”

Peter Gauweiler, a conservative deputy who is one of the plaintiffs, claimed that EU rescue plans and the mooted permanent European Stability Mechanism constituted “a de-facto abrogation of (parliament’s) budget sovereignty.”

The court’s ruling is thus expected to weigh the legality of German participation in the ESM, a permanent rescue fund designed to replace the current European Financial Stability Facility (EFSF) in mid-2013.

German judges might require changes such as a systematic parliamentary vote on requests for ESM funds, a condition which is not formally the case at present.

Joachim Starbatty, a university professor who was one of the first to file a complaint with the court, summed up his position by saying: “We find ourselves on a path we cannot see the end of and we want to know if this is the right path.”

The court in the southwestern city of Karlsruhe is hearing appeals against the government’s decisions to contribute to rescues for debt-laden Greece last year and the EFSF, which was established thereafter.

The decisions committed Germany to guaranteeing loans of up to €22.4 billion ($32.4 billion) for Greece and more than €200 billion for Ireland and Portugal.

In May 2010, the court rejected a request for an injunction against payment of the German aid.

The new ruling is to deal with the matter in greater debt and is expected only in a few months but questions raised by the court should point to the issues it considers most pertinent.

In the light of its earlier verdicts, “it seems very unlikely that the court will force Germany to withdraw its commitment to the current rescue facilities,” Citigroup Global Markets economist Jürgen Michels commented.

Finance Minister Schäuble argued in a statement to the court that Berlin had to stand alongside its eurozone partners, saying “a common currency cannot make it without solidarity among its members.”

He added that “no significant measure to stabilise the eurozone has been taken without the parliament’s support.”