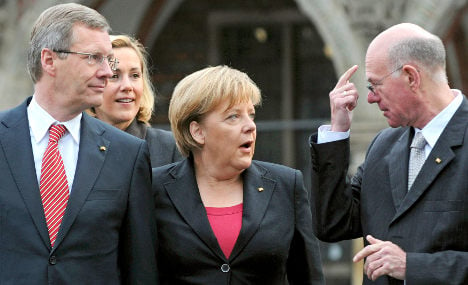 Compared to the United States – a strong but often unscrupulous country – Germany in the past was long seen as weak but overly moralistic. America waged war around the world, toppled dictators, made billions of dollars worth of tax cuts, while Germany appealed to the world’s only superpower to protect the climate and give terrorists a fair trial.

But now that relationship has changed. The United States has become weaker, but is still fairly ruthless. Germany is stronger, but still extremely prone to high-minded moralizing – even while considering the sale of hundreds of tanks to Saudi Arabia. Can this new balance hold?

To name one example, hardly any other country has dealt with the recent financial and economic crisis as well as Germany. The economy is booming, unemployment is sinking, and tax revenue is filling government coffers. Germany was proved right not to bow to American pressure for more stimulus packages, and the governments in Washington, London, Paris and Madrid now look to Berlin with a mixture of envy and admiration.

Or take the example of Iraq: even US neo-conservative hardliners, along with their European allies in Britain and Poland, now consider the invasion a mistake. The mood is also tipping against the NATO-led operation in Libya, and everyone wants out of Afghanistan too.

As a result, many Germans see their concerns about those military missions confirmed. War has been proven to be neither a successful way of curbing terrorism, nor has it accelerated the development of democracy.

And what about nuclear power? While other countries carry on pumping billions into this hazardous form of energy production, we are shutting down reactors and investing in green technologies.

The cost will be worth it – the leading industry transformation of the 21st century promises massive profits through energy efficiency. Germany is already the market leader in a number of green sectors, with a share of the global market totalling between 15 and 20 percent.

That’s why it might not be a bad twist of fate that the country is currently being led by unpretentious, almost completely anaemic politicians. President Christian Wulff, Bundestag speaker Norbert Lammert and Chancellor Angela Merkel: no-one could seriously accuse any of these people of arrogance and finger-wagging.

What could be seen as a flaw – weak leadership – has become, from a global perspective, an advantage. Because one thing we know: the teacher’s pet may be forgiven many things – except being a braggart. The stronger and more moralistic Germans feel, the more humble they should present themselves on the international stage.