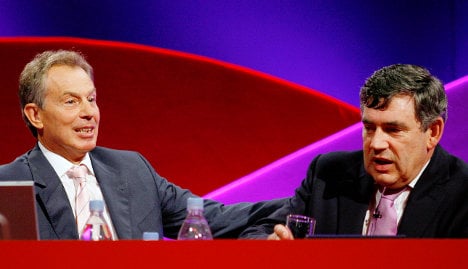 According to extracts from Alastair Campbell’s diaries published in The Guardian newspaper, officials from Britain’s MI6 foreign intelligence agency told Blair that Paris and Berlin aimed to “divide them even further.”

Campbell noted in October 2000 that Blair had shown him intelligence which said Germany had noticed the duo “were on a different track to each other.”

At an EU summit in December 2000, Campbell wrote that MI6 “spooks” had told him that France and Germany “were exploiting the fact that GB (Brown) was seen as a rival to TB (Blair), to try to divide them further.”

Blair, leader from 1997 to 2007, was often at loggerheads with his powerful finance minister over a deal the pair reportedly struck in 1994, when the then opposition Labour party was searching for a new leader.

Brown stepped aside to allow Blair a clear run at the party’s top job on the understanding that Blair would grant him wide-ranging powers and eventually the leadership should Labour gain power.

Labour swept to victory in 1997, but the longer Blair remained in charge, the more fraught the pair’s relationship became, Campbell recorded in his diary.

Blair and Brown repeatedly clashed on key European issues important to Germany and France, including whether Britain should join the euro. Whereas Blair wanted to take his country into the common currency zone, Brown was vehemently opposed.