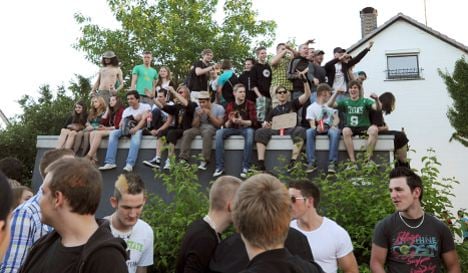 “If public safety and order are endangered, then Facebook parties will have to be banned beforehand,” Lower Saxony’s Interior Minister Uwe Schünemann told the Welt am Sonntag newspaper. If these sorts of mass gatherings are already taking place, then they should be broken up, he added.

North Rhine-Westphalia’s Interior Minister Ralf Jäger voiced similar concerns. “If, in advance of an announced Facebook party, there are concrete indications of a danger to the participants or third parties, then it is the duty of the local authorities to ban the party,” he told the same paper.

At the beginning of June a young girl made the mistake of posting an invitation to her 16th birthday party on Facebook without marking it private. Around 1,600 uninvited guests turned up to the party in Hamburg, necessitating the deployment of 100 police officers. Eleven of those attending the party were detained on charges of aggravated battery and property damage.

Later that month police officers in several cities were called in to break up parties organised over Facebook. At a spontaneous party in Wuppertal that attracted 800 guests, 16 people were injured and there were 41 arrests after things got out of hand.

Schünemann of Lower Saxony said that the states should apply the existing laws consistently and improve their educational work with young people and parents.

He recommended the introduction of an “Internet Driving License” in schools, to explain the dangers of Facebook. “Young people often don’t realize what they are getting into,” he said.

The local authorities should also present parents with the bill for the costs associated with the parties. “They would have to cover the costs of the damages and clearing up. That can run to several thousand euros.”

Bavaria’s Interior Minister Joachim Herrmann warned that a harmless birthday invitation can quickly turn into a “massive security problem” with unforeseen consequences. For the host that can sometimes lead to “immense costs,” as the aim of many of these “party guests” is often to go on the rampage, he claimed.

“If there is an investigation into criminal offenses, the initiator should if possible pay for the costs of the police operation,” he told the newspaper.