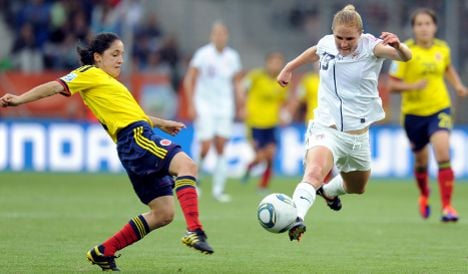 The demolition of the South Americans puts the United States top of Group C ahead of Sweden on goal difference, with both sides unbeaten after two games. They will go head to head for group supremacy in Wolfsburg on Wednesday.

They join France and Germany, who have already reached the knock-out round from Group A, with Japan going through in Group B.

Although the world number one team overwhelmed the Colombian debutantes with goals from Heather O’Reilly (12), Megan Rapinoe (50) and Carli Lloyd (57) the scoreline belied a string of missed opportunities by the Americans.

“We didn’t finish our chances but as long as we create chances I’m happy that we will put them away eventually and we did in the second half,” said US coach Pia Sundhage.

“The advantage for the US is that we’ve been winning gold, silver and bronze medals since 1991 (the first Women’s World Cup). This is something that we can call up when we’re pushed into a corner.

The South Americans could have been further behind at half-time but for some big saves from Colombian goalie Sandra Sepulveda.

Star US striker Abby Wambach had a bad day missing numerous chances for the reigning Olympic champions but O’Reilly made no mistake after 12 minutes, slamming past the beleaguered Sepulveda with a glorious effort from distance.

For the goal celebration the entire US team lined up and saluted US military personnel among the sell-out 25,475 crowd who had travelled from bases in nearby Heidelberg in southwestern Germany.

Sweden, the 2003 finalists, had to wait for Lisa Dahlkvist’s 64th-minute goal to see off North Korea on front of 23,768 spectators in Augsburg earlier.

North Korea’s defence held up well before three Swedish midfielders helped give the Europeans the lead in the 64th minute.

Linda Forsberg sent a diagonal cross from the left side to the far post where Therese Sjogran volleyed back across the goal mouth and Dahlkvist blasted in from four yards.

“I always felt that a goal was going to come, I’m just happy to have been the one to score it,” said Dahlkvist.

Colombia and North Korea crash out of the tournament after losing both their games and will play each other in their final group game on Wednesday with nothing but pride at stake.

“This team is very young and they are inexperienced in such a competition as this,” said North Korea coach Kim Kwang Min.

“But this World Cup will have taught them a lot of lessons. In four years time they will be stronger.”

The competition continues on Sunday with Group D leaders Brazil and Norway looking to gain a foothold in the knock-out round in Wolfsburg as Australia and Equatorial Guinea square off looking for their first points in Bochum.