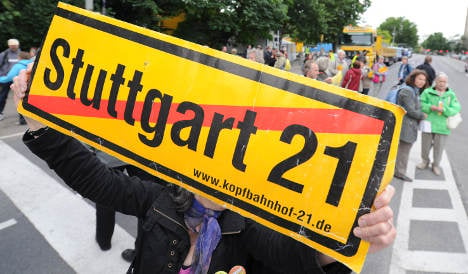 The documents from two Deutsche Bahn subsidiaries, which date from 2002 to 2010, indicate that two years ago the company was already estimating that the project would cost far more than €4.5 billion. That is despite the fact that a condition attached to the project was that it did not exceed that figure.

The massive Stuttgart 21 construction project involves moving the city’s main train station underground and laying an additional 57 kilometres of new tracks. The aim is to make the city a major European rail hub.

However, the project is deeply unpopular with many local residents who object to the cost, argue that it is unnecessary and have been demonstrating en masse for months. Their opposition was a major factor leading to the election of a Green-led coalition in the state of Baden-Württemberg early this summer.

According to Der Spiegel, Deutsche Bahn released official cost estimates that were significantly lower than those the company had calculated internally.

However, DB Projektbau, the subsidiary which carries out large railway projects for the national rail carrier, was actually assessing the costs at €4.1 billion.

Yet it was only four years later that Deutsche Bahn boss Rüdiger Grube announced this sum as the anticipated cost of the project. By this time internal company estimates had already risen to over €5 billion.

A spokesperson for Deutsche Bahn, when contacted by the magazine, did not want to comment on the details. However, he said that “differing investment sums” were not unusual and that they arose from “different, advanced stages of planning.”