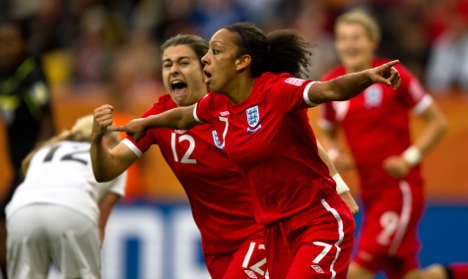 The 32-year-old from Tokyo stole the show in Leverkusen as she helped lift ‘the Nadeshiko’ to just their second quarter-finals since 1995, with Shinobu Ohno also finding the net for the Japanese.

They now join France and Germany who have already reached the knock-out round from Group A, while England is on the verge of their third quarter-finals in as many appearances in the tournament despite suffering a scare in Dresden.

A first-half goal from Sarah Gregorius had put the New Zealand Ferns into a shock lead against England in the Group B tie before Everton midfielder Jill Scott equalised and then substitute Jessica Clarke hit the winner.

With four points, England are almost assured of a place in the last eight, but they still face unbeaten Japan in Augsburg next Tuesday.

England had made a bright start in front of a crowd of 19,110 despite early worries when experienced striker Kelly Smith limped off with an ankle injury.

She recovered enough to return to the pitch, but her team were shocked when Gregorius stabbed the ball past Karen Bardsley after 18 minutes.

The 23-year-old could have made it 2-0 towards the end of the first half when she managed to get behind two England defenders with the ball at her feet, but failed to make her shot count.

England’s sustained pressure early in the second half paid off when defender Alex Scott curled in a cross which Scott headed over the out-stretched arms of Kiwi goalkeeper Bindon after 63 minutes.

But the Kiwis’ brief dreams of an historic first World Cup point were dashed after Clarke came off the bench to score the winner on 81 minutes.

“We needed the win which was fantastic,” said Clarke. “To be honest, I can’t say why we haven’t clicked so far.

New Zealand are now going home after their second defeat and are playing for pride against the Mexicans in Sinsheim on Tuesday, who still have a mathematical chance of going through, but need a goal-packed win to do so.

In the Japan-Mexico game, Sawa combined perfectly with fellow midfielder Aya Miyama to score two early goals after 13 and 39 minutes, adding her third on 80 minutes for a Japanese World Cup record. Ohno netted after 15 minutes.

“Even for myself it was a bit of a surprise,” said Sawa, who is competing in her fifth World Cup.

“I didn’t dare imagine I could score so many as three goals.

“The first and second were in combination with Miyama and she really gave me a nice ball.

You could also say they’re Aya’s goals too.”

Coach Norio Sasaki praised the strong team spirit. “Individual players didn’t try to show off their own skills but played as a team and that was good,” he said.

The Japanese demolished the young Mexican side to achieve their second win after their 2-1 opening success against New Zealand.

Nicknamed ‘the Nadeshiko’ – a pink flower symbolising grace and beauty – the Japanese showed their mettle from the outset.

The Mexicans, who had held England 1-1 in their opener, were left helpless as Sawa added a second six minutes before the break when she rose above the melee in front of the goal to head in a corner from Miyama.

And she broke Mexican hearts when she fired in past diving 16-year-old keeper Cecilia Santiago following a cross from Yukari Kinga on 80 minutes, before being substituted to an ovation from the 22,291-strong crowd.

It was a triumphant start to the tournament for the fourth-ranked Japanese who were not initially sure if they could compete in Germany after the earthquake and tsunami that devastated their country in March.

Mexico coach Leonardo Cuellar said Japan could even go all the way.

“They’re an excellent team and they are definitely going to be one of the contenders in this World Cup,” he said.

The competition continues on Saturday with Sweden taking on North Korea in the afternoon match and the United States, the top ranked team in the world, playing Colombia in the evening.

On Sunday Group D leaders Brazil and Norway looking to gain a foothold in the knock-out round in Wolfsburg as Australia and Equatorial Guinea square off looking for their first points in Bochum.