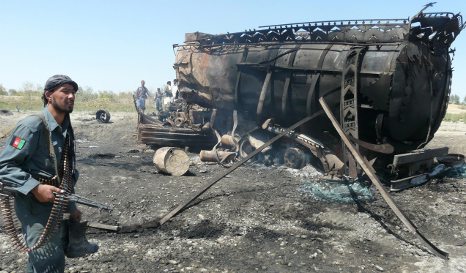 The Süddeutsche Zeitung reported on Saturday that the coalition members of a parliamentary enquiry probing the 2009 bombing in the Kunduz region have vindicated the former minister.

They blame former Army Chief of Staff Wolfgang Schneiderhan and former ministry official Peter Wichert for not providing the minister with the full facts about the attack.

German Colonel Georg Klein gave the order to bomb two petrol tankers that had been stolen on September 4, 2009. The air strike killed up to 142 people, including dozens of civilians, severely damaging Germany’s reputation in Afghanistan and shocking people back home.

Just days after taking office in October 2009 Guttenberg said that the airstrikes had been “militarily appropriate.” Shortly afterwards he reversed that assessment and fired both men for keeping vital information from him.

The enquiry’s members from the ruling conservative Christian Democrats and pro-business Free Democrats are backing Guttenberg’s version of events.

He had told them that he only undestood the full details of the airstrike in November 2009 when documents surfaced, which he claims Wichert and Schneiderhan had kept from him.

The coalition members of the committee concluded that Guttenberg was, therefore, justified in firing the men.

Guttenberg resigned at the beginning of this March after it emerged that he had plagiarized large sections of his doctoral thesis.

The enquiry into the Kunduz bombing lasted over a year and in June all the parties agreed on a joint report on the facts of the case.

In the meantime the coalition has completed its own assessment of these findings. The opposition parties will present their assessment in August, which may differ significantly from that of the governing coalition.