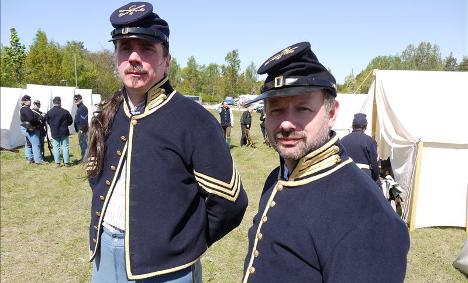 Christian Ortschig’s weekdays are spent working in Germany’s social insurance administration. But on any given Saturday, he might be leading Union troops into battle against the Confederate Army.

Ortschig’s historical re-enactment character is modelled after a member of the 79th New York Cameron Highlanders – a militia unit of Scottish immigrants from New York City who fought for the anti-slavery North. That accounts for his uniform: a brightly-coloured kilt and a dark jacket with brass buttons.

Ortschig stands in a field overseeing the military drills of a couple dozen men and women as they prepare for the afternoon’s big battles at the Wild West theme park “El Dorado,” which is located on the outskirts of Templin about 50 miles north of Berlin.

“This is like a film, like theatre,” says Ortschig. “I am not a Union boy. I am not a Rebel boy. I am a German. But when I put on this uniform, I play a Union officer.”

Cannons fire in the distance. Men and women mill around their campsites that are outfitted with antique furnishings like gas lamps and old fashioned bed rolls.

Like Ortschig’s Scottish uniform, a lot of the history here is an odd mishmash of fact, fancy, and convenience. Men meticulously dressed in period costumes from the 1860s mingle with soldiers in uniforms from the US Revolutionary War. Conversation seems to focus on the physical trappings – the clothes and the weapons – not difficult issues like slavery or the war’s staggering body count.

Such events happening about once a month in Germany do feel a little bit like drama camp for adults. But most of the people say they come for the history, not just the costumes.

“We know that 200,000 Germans served in the US Civil War. That’s more than 10 percent of the Union soldiers,” Ortschig says. “So this is our history too.”

It’s a number cited by most of the participants. Often, individuals model their characters after specific German immigrant soldiers so the history feels more personal.

The history they are re-enacting this weekend is the bombardment of Fort Sumter and the first battle of Bull Run.

Ute Frevert is the head of the Max Planck Institute for Human Development in Berlin. She says the choice for Germans to re-enact the Civil War battles may seem odd on the surface, but she explains it this way: “It’s safe.”

In Germany, it’s taboo to glorify anything military-related since World War II. So for Germans who want a taste of the pageantry of battle, the 19th-century American conflict fits the bill.

“It’s safe enough for Germans to re-enact the US Civil War because it is so far away,” says Frevert. “It is not something you associate with Germany.”

When asked why Rebels typically outnumber the Yankees at these re-enactment weekends, Frevert says that might be Germans’ sympathy for the losers, or because the Confederates’ costumes are fancier. Or, she says, it could be the result of Rhett and Scarlett’s cinematic romance.

“Well there is much more folklore and fantasy involved with the Confederates because of ‘Gone with the Wind.’ It’s been a staple of German popular culture,” says Frevert.

At El Dorado, the Confederate troops line up in a dusty square to face off with their Northern enemies. A narrator reads bits of history over operatic music to educate the few spectators here.

American Chris McLarren marches to battle dressed as a Confederate captain. He thinks the Germans here “are doing a wonderful job.” He says their zeal for perfection and attention to detail bring history to life. And many of the guys understand the military aspects because they were soldiers once too.

“Many of these guys have served in the West or East German armies,” says McLarren. “There is that camaraderie in any military situation, and there is some of that in this.”

That’s what attracted university student Tobias Melchurs. He says now that Germany no longer has mandatory military service, this is his only way to feel like he has “brothers in arms.” But for him, it’s not just about the action.

“We also think about how it is cruel that brothers fought against each other. I have friends on the other side in the South and I would never shoot on them in real life,” says Melchurs. “This is only a game.”

And it’s the kind of game where the battles end not in bloodshed – but with German beers around a fire.