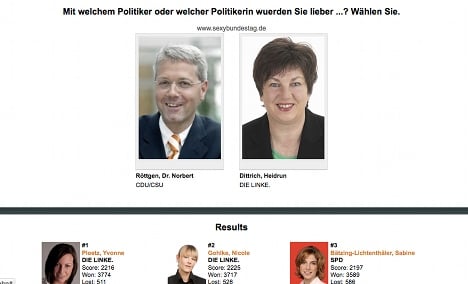 Francis Boulle, who has already set up similar websites for the British and Irish parliaments, explains on the site in English that he “thought it would be an interesting opportunity to hold the first ever Bundestag beauty contest and find out once and for all which which Politiker and Parties have the most sex-appeal.”

The site randomly puts photos of two German politicians side-by-side and visitors have to decide which they find more attractive.

On his Twitter feed Wednesday, Boulle wrote the site has gotten 300,000 hits in the last two days.

So who’s Germany’s sexiest Bundestag member? For some reason a lot of them seem to be female members of the socialist Left party. As of early Thursday, three of the top five were leftist women.

Twenty-six-year-old Yvonne Ploetz with a funky lip piercing was in first place followed by the more traditionally groomed 35-year-old Nicole Gohlke in second. Sahra Wagenknecht, who was given the moniker “the beautiful communist” by the German media due to her strident views and frequent talk show appearances, was ranked fourth.

A man didn’t pop up until place number 40, the 26-year-old Sven-Christian Kindler from the Greens.

Chancellor Angela Merkel from the conservative Christian Democrats was a lowly 518th place out of a total of 636 MPs. Bringing up the rear was Valerie Wilms, who is a 57-year-old member of the Greens.