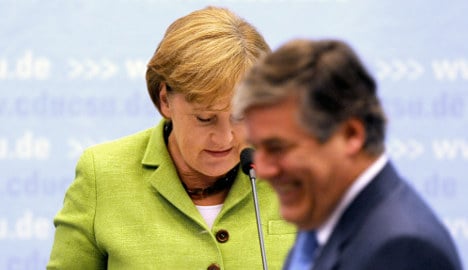 “If you want to be able to continue working in stable countries, then lend us a hand and do so with a modicum of goodwill,” Merkel said in a speech to bankers and members of her conservative Christian Democrats at a conference in Berlin.

Merkel called the Greek parliamentary vote on Wednesday approving emergency austerity measures “really good news” that would help pave the way for a massive bailout by the European Union and the International Monetary Fund.

Amid angry street protests, Greek MPs voted in favour of €28.4 billion ($40 billion) in spending cuts by 2015, unlocking €12 billion in emergency aid. The funds represent the fifth tranche of a €110-billion package agreed last year with the EU and the IMF, and are needed to prevent Greece defaulting on its mammoth debts.

Such a default could have grave consequences not only for the 17-nation eurozone and for the global financial system.

The head of Germany’s largest bank, Deutsche Bank CEO Josef Ackermann, told the meeting the banking community was working “around the clock to find a solution” to the Greek crisis.

Speaking of talks beginning Thursday between Germany’s leading banks and Finance Minister Wolfgang Schäuble, Ackermann said the bankers “will make an offer” of help, “not because it pleases us, but in order to avoid the nuclear meltdown” which would otherwise overwhelm all eurozone economies.

But such aid will cost German financial institutions dearly, he added.

“This will cost substantial amounts, depending on the plan that is chosen, we’ll discuss that tomorrow,” Ackermann said.

The banker said German financial exposure to Greece stood at about €20 billion, adding that financial institutions might have to depreciate the assets by 45 percent if they were to roll-over loans to Greece to assist in a second rescue package.

“It looks nice and simple to roll-over (credit), but this creates a new category of funds” that we shall have to carry, Ackermann said. “You can’t just pretend it’s the same thing,” he added.

Earlier Berlin signalled support for a French plan to involve private lenders in a new rescue for Greece with deputy finance minister Jörg Asmussen describing the plan as a “good foundation for discussion.”

A spokesman for the German Federation of Private Banks (BdB) told news agency AFP that the French plan was “the most detailed currently on the table”, but that discussions were continuing on how it might be implemented.

President Nicolas Sarkozy announced Monday that France was working on a 30-year scheme to give Greece time to get on top of its debt mountain, which is now worth more than a year-and-a-half of the country’s total output.

“We have concluded that prolonging loans over 30 years, and putting them on the level of European loans indexed on Greek growth, would be a system that all countries might find useful,” Sarkozy told a news conference.