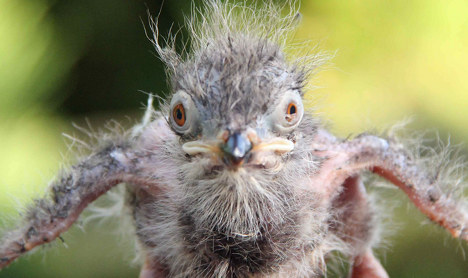 The four-day-old seriema bird has been drawing attention from visitors for its odd, ruffled appearance.

The animal is currently as big as a fist and has to be fed by hand, said Peter Brand, park manager at Westküstenpark St. Peter-Ording in the state of Schleswig-Holstein.

Eventually it will grow into a more reasonable looking adult – typically seriemas can grow up to 80 centimetres and nest in trees three metres off the ground. Though they can fly short distances, they prefer to run and climb up trees.

Seriemas are the only known descendants of so-called “terror birds,” huge flightless carnivorous birds that roamed South America around 60 million years ago.

The frightening birds had massive beaks and were among the most dangerous predators of their time, according to research by Argentine and US scientists last year – they are thought to have hacked their victims into bloody pieces before gobbling them up. They could sprint at a blistering 48 kilometres per hour (30 mph).

Seriemas today are native to South America but are much more tame than their ancient, violent cousins. They eat small animals such as insects and rats and sometimes supplement that with nutritious plants.

The nature park features a variety of unusual birds and other animals in addition to the seriemas, including ostriches and storks.