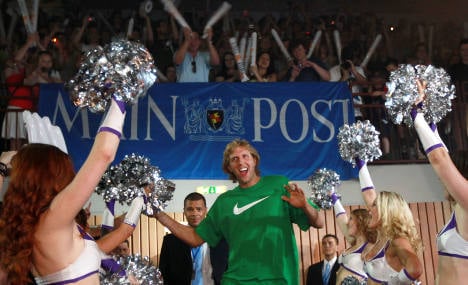 “It’s all unbelievable,” the newly-minted NBA champion said Tuesday before 3,000 fans at Würzburg’s sold out s.Oliver Arena. “Everything happening here is absolutely overwhelming.”

The day would only get better for the 33-year-old.

After a press conference, he attended a ceremony at the Würzburg town hall to sign his name in the city’s “Golden Book“, likely marking the first time that an NBA player has autographed a volume also signed by Winston Churchill.

Nowitzki was then shuttled to the Würzburg Residence palace, where he took in a lavish reception held in his honour.

In an unusual twist, the fanfare of Nowitzki’s reception was enhanced through the efforts of an ordinary fan.

Michler started a Facebook group titled “Established for the reception of Dirk Nowitzki on the balcony of the Würzburg Residence“, which had the unexpected result of mobilising thousands to greet the star on his homecoming.

“We all watched the last game together in Würzburg and I got a sense of this incredible energy,“ Michler said.

“Then I thought that such a superstar can’t simply be greeted at the town hall and eventually be voted Würzburg’s athlete of the year,“ Michler added.

“This needed to be something special.“

Within a few hours after its formation, Michler’s group had over 9,500 members on Facebook. Then Silke Nowitzki, Dirk’s sister who organised his homecoming, got word of the group and decided to turn its mission into reality.

Several thousand adoring fans showed up to cheer Nowitzki, but Michler got perhaps the biggest prize of all: a seat at the reception as a guest of honour.

In lieu of winning an NBA ring, not a bad dream to make come true.