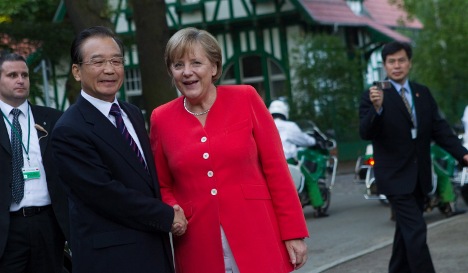 “You have to be aware that we didn’t achieve our Western system overnight either,” he told broadcaster Deutschlandfunk as Germany hosted Chinese Premier Wen Jiabao.

The hosts are facing the delicate job of standing firm on human rights without openly berating its often-sensitive guest and also taking advantage of the considerable economic opportunities.

Westerwelle said long-term progress in China was possible despite recent setbacks. He said Germany’s job now was to continue to press China on sensitive issues such as how it treats its dissidents.

“Human rights are not an internal affair,” he said.

Germany recognised its economic opportunities in China but could not lose its internal compass on moral issues.

Previously on Monday night, Westerwelle had told broadcaster ZDF: “Of course you cannot separate trade and development from the issue of human rights, the rule of law, civil rights and also freedom for art and culture. If things are discussed in a face-saving, reasonable way, you can talk about everything, even the most difficult questions.”

Wen arrived in Berlin late Monday from London where he and British Prime Minister David Cameron signed trade deals worth €1.6 billion while Wen brushed aside questions over Beijing’s rights record.

The German-Chinese contracts, which both sides have agreed to keep under wraps until a press conference later Tuesday, are expected to involve cars, chemicals and aeronautics, said the German official, who spoke on condition of anonymity.

Berlin has rolled out the red carpet, starting with an informal dinner for Wen and his inner circle hosted by Merkel at a lakeside villa Monday night.

But Berlin has expressed serious concerns about restrictions they have apparently been placed under including their freedom to speak to the media.

“I think you have to put the word ‘release’ in quotation marks,” the German official said, while declining to comment about speculation that the end of their custody was timed for Wen’s European tour.

Human Rights Watch urged Berlin to place the issue front-and-centre at the talks, saying that Ai’s release showed “that political pressure on the Chinese government works.”

Activists pledged to hit the streets during Wen’s two-day stay.

A group called Tibet Initiative Deutschland said that while Merkel welcomes Wen to her chancellery with military honours, it would release 300 black balloons to call attention to the reported detention of 300 Buddhist monks from the Kirti monastery in Sichuan province.

Wen told reporters in London Monday that China would not accept “finger-wagging” over human rights.

On the first leg of his three-nation European tour, Wen promised officials in Hungary that China would continue to support its faltering economy, and pledged to similarly aid the eurozone as it is rocked by a debt crisis.

The German official said the issue of China buying more government bonds from debt-wracked countries was certain to be discussed.

Analysts estimate that China has already bought more than €40 billion of European assets this year but this has done little to curb the crisis.