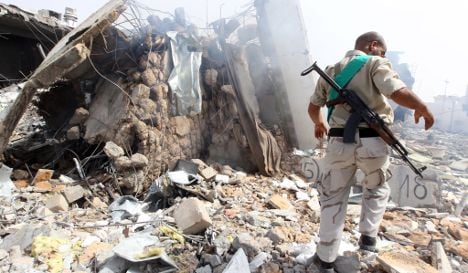 The website of news magazine Der Spiegel reported Monday night that NATO, facing a shortage of bombs, approached all its members last week about contributing the components and technology for bombs and other weapons.

Berlin has agreed and Defence Minister Thomas de Maizière has approved the measure. The Bundeswehr will supply bomb parts and complete shells to the NATO Maintenance and Supply Agency (NAMSA), the magazine reported, citing government sources.

So far there have been no requests from NAMSA for specific parts or shells, though the details of what NATO needs are expected to be sent through within a few days. Then it will be decided whether the Bundeswehr can help and how quickly it can supply the weapons technology needed.

The move represents another concession by Germany after its surprise abstention in the United Nations Security Council on the vote to authorize military action. Along with its refusal to commit forces to the mission, the decision earned the ire of its closest allies including the United States, France and Britain.

German government figures, notably Foreign Minister Guido Westerwelle, has since spoken critically of the mission. But the German government appears to hope that its isolation on the Libya issue will be partly mitigated with the latest move.

Since then, planes from those three allies, under the command of NATO have been bombing Libya in order to contain dictator Muammar Qaddafi and help the rebels who have been trying to depose him since the uprising began in February.

The request from NATO follows repeated warnings from Britain in particular that the daily attacks and long patrol flights could no continue at such pace. There was now a clear shortage of air-to-ground missiles, which the sorties over Tripoli and other parts of the country urgently need.