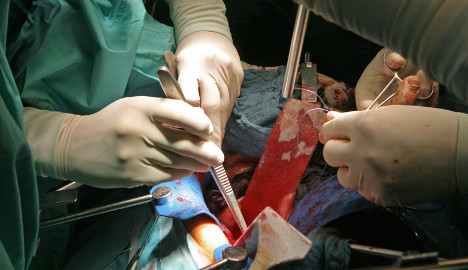 The plan, which could be in place by the end of the year, aims to cut the long list of people waiting for organ transplants. Today about 12,000 people are waiting for transplants nationwide and about 1,000 of those are likely to die before a donor is found.

Under the new system, everyone in Germany will be asked at least once in their lives if they want to make a donation in the future. They question might come from doctors or perhaps insurance companies.

Experts say the current system is at least partly to blame for the shortage. Presently, Germans have to actively opt-in to say they want to donate organs in the event of their death. While family members can also choose to donate their loved ones’ organs, many don’t make the decision until it is too late for transplantation.

Only 17 percent of Germans have signed up to donate organs, although research shows roughly 70 percent would be willing to do so if the process was made easier.

Details are currently being hammered out in the German Bundestag, where the idea appears to have broad support.

It has been championed by a broad coalition of German leaders including Social Democratic Party parliamentary leader Frank-Walter Steinmeier, who donated a kidney to his wife last year and earlier this year said he wanted the law passed soon.

Other solutions to Germany’s organ shortage have been discussed, such as automatically considering everyone who dies as a organ donor, unless he or she earlier actively opted out.

But that has led to concerns – which experts insist are unwarranted – that doctors could attempt to speed patients’ deaths so they could harvest their organs.

One of the problems in the whole debate is that thinking about organ donation also means thinking about one’s future death, said Günter Kirste of the German Institute for Organ Transplant.

“Not everyone does that gladly,” he said. People should remember that a donor’s passing can create a chance for another person to live, he said.