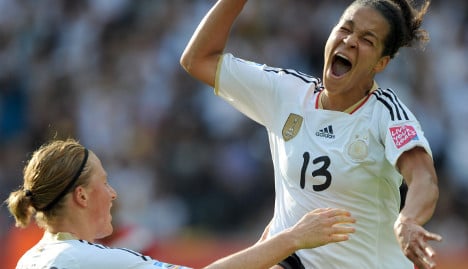 Having won both the 2003 and 2007 editions, Germany are bidding to complete a hat-trick of titles on home soil and had few problems against the Canadians, who threatened the German goal on only rare occasions.

First-half goals by midfielders Kerstin Garefrekes and Celia Okoyino da Mbabi put the hosts in control before Canada captain Christine Sinclair, who broke her nose in the first half, slotted home a late free-kick for the guests.

“It was the first game so we were a bit nervous. There is room for improvements and we will improve,” said goal-scorer Garefrekes, who also supplied the pass for the second goal.

The win puts the Germans top of Group A after France’s earlier 1-0 win over Nigeria.

“We got two goals in the first half and didn’t play so well, then in the second half we were much better organised, but we couldn’t score,” said Germany coach Silvia Neid.

“Things got tight at the end and it could have been 2-2, so I am very happy we won the first game.”

The hosts squandered a string of second-half chances, while Canada grew in confidence as the game wore on.

“The first game in a World Cup tournament is always tough and maybe were a bit intimidated at the start, but I think we did well,” said Canada coach Carolina Morace, who paid tribute to her plucky captain Sinclair.

“Christine is a fantastic player and she took her chance well. The doctors have told me the nose was broken, but she insisted on playing on. She knows what she can do and it would have been hard to take her off with her experience.”

With Germany having gone through the entire 2007 campaign without conceding a goal, Sinclair became the first player to score against them at a World Cup since Sweden’s Hanna Ljungberg in the Germans’ 2-1 win in the 2003 final.

After a glitzy opening ceremony when a giant mirror ball released hundreds of football-shaped balloons into the Berlin sky, Germany got their campaign off to a good start with the first goal coming after just 10 minutes.

Having been denied from a crisp shot just moments before, right winger Garefrekes headed home a cross from left-back Babett Peter to put the hosts ahead in front of a sell-out crowd of 73,680.

Germany then punished some sloppy defending as centre forward Okoyino da Mbabi made it 2-0 just before the break.

A towering long-ball from Garefrekes put Okoyino da Mbabi — who turns 23 on Monday — away and with the Canadian defence nowhere near her, she slotted her shot past goalkeeper Erin McLeod on 42 minutes.

It was the German midfielder’s fourth goal in her last five games.

Both Popp and midfielder Kim Kulig clipped the crossbar with second-half shots as the hosts failed to add to their tally before Sinclair curled in a late free-kick to pull one back.

The last time Germany lost was in March 2010 when the USA inflicted a 3-2 defeat at the Algarve Cup.