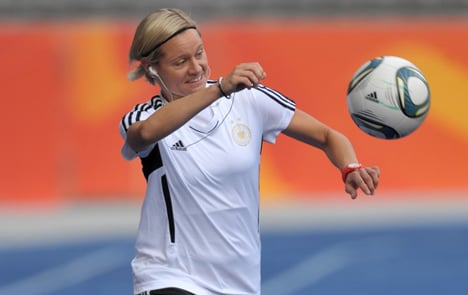 France take on Nigeria earlier on Sunday in Sinsheim, also in Group A, but the tournament will start in earnest when the hosts begin against the Canadians in Berlin after Sunday’s opening ceremony.

“We need a good start to get the fans behind us,” said Germany coach Silvia Neid. “It is very important to get off to a win. It is going to be a tough challenge, but I promise we will do our best.”

Neid said she would leave the final team talk to one of the players to find the right words of motivation.

“It is not yet clear who will do that, I will decide on the bus ride to the stadium and talk it through with them,” she revealed. “The players have now been together a long time. They will find the right words. The tingling in the belly has started.”

Germany will be led by striker Birgit Prinz, 33, who will win her 213th cap, having already scored a staggering 128 goals for her country and lifted the World Cup trophy in Shanghai four years ago.

Having begun her career also against Canada back in July 1994, Prinz will bow out after the World Cup and is hoping to get her hands on the trophy once more after the final in Frankfurt on July 17.

“Of course, I hope that Canada will not be my last game,” she said. “I want to give the tournament my best shot and see what comes of it.”

A crowd of 73,680 spectators is expected – a new record for a European game of women’s football – and the Germans are in good form, having won all four of their warm-up games and having yet to concede a goal this year.

The German team has a good blend of youth and experience, with up-and-coming midfielders Kim Kulig and Celia Okoyino da Mbabi predicted to become household names.

Canada have yet to beat the Germans in nine previous meetings between the nations, but the North American champions are out to cause an upset.

The Canucks, who host the finals in 2015, finished their Confederation of North, Central American and Caribbean Association Football (CONCACAF) campaign unbeaten with a tally of 17 goals scored and none conceded.

This impressive form was thanks in no small part to the heroics of goalkeeper Karina Leblanc.

The Philadelphia Independence keeper says Canada have “moved up a level” since the appointment of coach Carolina Morace in 2009.

Their worst defeat under Morace’s stewardship came in 2009, with a 5-0 friendly loss to none other than Germany, but the Canadians are hoping the occasion may get to the hosts.

“The Germans could suffer stage fright, particularly given all the supporters who’ll be there to encourage them,” said Morace. “If we play well in the opening match, anything is possible.”

“Germany will start as the overwhelming favourites, but let’s not forget that we played just as well as them during our last friendly.”