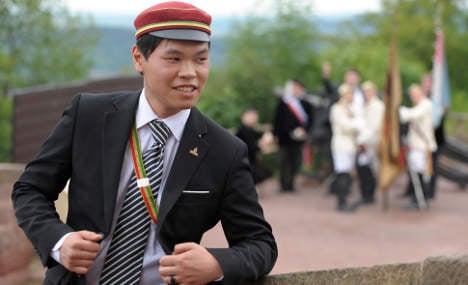 The Burschenschaften, one of Germany’s oldest student associations, unites members under the values of ‘Honour, Freedom, Fatherland’ in Germany and Austria.

The fraternity members adhere to old-fashioned traditions including dressing up in cadet-style uniforms, carrying fencing rapiers and taking part in torch-lit parades. Some even take part in arcane rituals such as receiving a fencing scar on the cheek.

Some chapters even attract the attention of German authorities for being so right wing as to be anti-democratic and welcoming homes for neo-Nazis.

This year’s annual meeting of the Deutsche Burschenschaften (DB), one of the largest umbrella associations, was faced with a proposal to expel an entire fraternity because it had accepted a German citizen with Chinese parents as a member.

The Alte Breslauer Burschenschaft der Raczeks zu Bonn had applied for the Burschenschaft Hansea zu Mannheim to be kicked out of the DB because Kai Ming Au, spokesman for the Mannheim fraternity, was ethnically Chinese even though he was born in Mannheim and considers himself fully German.

Stereotypes brought to the fore

The row brought to the surface all the stereotypes surrounding the conservative, nationalist pro-German groups and revealed what many see as a power struggle within the association between its ultra-traditionalist rump with racist tendencies and its more liberal majority.

After 90 minutes of what left-wing daily Tageszeitung reported last week had been an emotional debate, the submission was withdrawn and new rules adopted which allow members to be either from German parents or in possession of German citizenship – although they still cannot be female.

A statement on the DB site stressed that the initial submission had been dropped on the Wednesday before the weekend conference. “It is and it always was possible for any German citizen to become a member of an association of the Deutsche Burschenschaft. The rumoured allegation that this was only possible for applicants with so-called German roots, is wrong,” DB spokesman Stefan Dobner said in the statement.

Now the 26-year-old at the centre of the controversy has told The Local he is determined to stand for election to the group’s ruling body after the incident.

Au said he wanted to show that the student group, long criticised for being nationalistic, reactionary and even racist, was not what people thought.

“Of course there is a minority who are like that, some of the member groups are not liberal in their thinking, but the vast majority of those I have had contact with are of liberal opinions,” he said.

The association encourages members to become members for life with part of its mission being to foster exchange of ideas, friendships and contacts between current student members and graduates. They are often well-financed, owning large well-situated buildings in the centre of cities kitted out like American fraternity houses where student members can live for minimal rent.

“At first I didn’t know what to think about it,” he said. “I knew nothing about who they were. I could just as easily have landed up in a Corps (student association). I was a bit sceptical, and looked it up on Google when I got home. There are about a hundred pages and they nearly all say the Burschenschaften are racist and anti-women, so I was really unsure.

But he said his opinion quickly changed after a visit to the fraternity.

“The house was really nice and the people who had shown me around seemed to be serious. I had a four- to six-week try-out period before I would have to become a member. It was only a week and I was at an event and people came up to me and asked me about myself. I was not being treated differently or looked at in a funny way. It was a good community.

“I was asking people during this time also, and my [now] Burschenschaft brothers told me about the association. Some told me there were some groups where it would be better I didn’t visit. In Germany it is normal that we visit each others’ groups when we are in a different town – if I was in Heidelberg or Munich I would go to visit the group there and have a beer or something; that is something we do.”

Au did not name the Alte Breslauer Burschenschaft der Raczeks zu Bonn as one of the groups he was warned away from, and said that even if he were in Bonn, he would be confident of receiving a warm Burschenschaft welcome – from another Bonn group.

“I got to know the other Bonn group this weekend at the national meeting. An older member had sent us a letter to support us,” he said.

Au seems convinced that the vast majority of his Burschenschaften brethren have a modern mindset and than the tradition-soaked association will be able to catch up with the rest of society where it perhaps still lags behind.

Move with the times

“Such a varied association has to move with the times, otherwise it will not survive,” he said, accepting the idea that his might be one of the new faces of Germany that could have a natural home in associations like the Burschenshaften.

He said his particular group in Mannheim was focused on personal and professional success and using that to play an important part in German society. Members are expected to do well in their studies and finish them quickly and then to go on to use their academic and other talents in their careers.

Au said he was ambitious within the organisation and that after two-and-a-half years as a member, including two stints as spokesman for the Mannheim group, he had intended to stand for election to the Deutsche Burschenschaften organising committee this year. But he postponed the idea when the row broke out.

“If this had not happened people would still think we were racists. I now have the chance to make it clear that it is not like that,” he said. “I have now said a hundred times that the absolute majority are liberal and that not more than 10 or 15 percent are not liberal.”