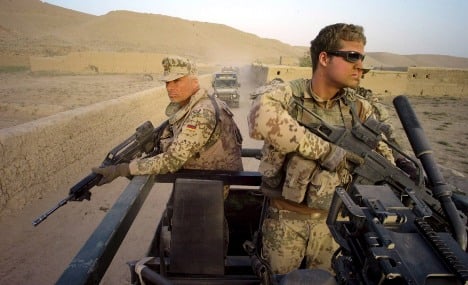 Bundeswehr officers complain in the reports obtained by German daily Bild that, “The soldiers’ proficiency in small arms and their command of the weaponry does not correspond to the requirements of the territory.”

“The soldiers generally have no mastery over their weapons,” the report added. “There is a need for more intense firearms training in the preparatory stages of foreign deployment.”

The reports also alleged that German soldiers have “little to no instruction and experience” in driving armoured vehicles. In Afghanistan’s difficult terrain, this has resulted in too many accidents and damaged equipment, putting additional lives at risk.

Medical care for wounded soldiers is also inadequate, according to the reports. Some generals complain that it has not been possible to meet the Nato target of 60 minutes for a wounded soldier to receive treatment, particularly since that has been reduce from a previous target of 90 minutes.

The situation had seemed to be improved by the deployment of additional American medical evacuation helicopters, but the Germans expressed doubts about the quality of American care. “The additional service of a German rescue medic working to German standards is vital,” one of the reports said.

Yet the reports, which span the time from November 2009 to November 2010, also acknowledged that German medics often lack the training required for trauma associated with gunshot wounds and explosives.

Soldiers are also dying due to insufficient protection from mines and hidden explosives, the cause of over 60 percent of all ISAF casualties in Afghanistan, according to the reports.

One report criticises a lack of, “the most modern metal detectors, protective suits, cameras and telescopes” that could prevent these casualties. Even where the equipment exists, inadequate training often leads soldiers to deploy it “poorly or not at all.”

A broader problem for the German mission in Afghanistan has been the increasing dominance of the Americans among the allies, particularly since US General David Patreaus took command of the International Security Assistance Forces (ISAF) last July.

He has integrated US soldiers into the leadership of the mission, the report said. “Thus the already marginalised contributions of other nations have been further marginalised… It has been established that the American dominance in the leadership and decision-making has further increased with the new commander.”

Bristling at this disadvantage, German officers advised that “it must be evaluated whether Germany, which maintains the third-largest troop presence” among allies in Afghanistan, “is actually well represented enough to be able to serve its interests in the headquarters.”

The reports also criticised the Bundeswehr’s strategy of training Afghan soldiers and police, with the international “mentors” training Afghans too often under-qualified for the job.

“Those filling mentor posts are inadequate in terms of age, rank and experience,” one report said.

“Age, rank and experience play a decisive role in Afghans’ acceptance of their partners, and the assignment of ‘gap-fillers’ to these posts is not conducive to solving the complex challenges of the Afghan army. Successful mentoring is not possible in these conditions.”

The Bundeswehr is slated to transfer responsibility for Mazar e Sharif, a major city in the north of the country, to Afghan authorities in July, according to Foreign Minister Guido Westerwelle.