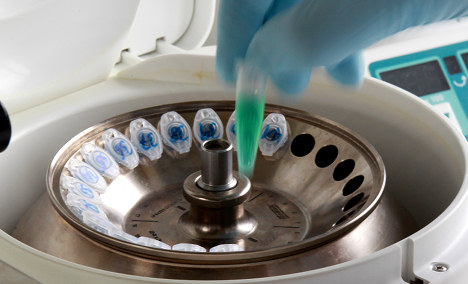 A team led by Helge Karch, a professor at the University of Münster, said the Escherichia coli germ O104:H4 was a rare kind that in essence was a “clone” of a strain first detected in a young patient in Germany in 2001.

Its genes for virulence come from two strains that have combined, the team’s report in the medical journal said.

The other, called enteroaggregative E. coli (EAEC), adheres in a “stacked brick” fashion to epithelial cells which constitute the intestinal lining.

The new study, which delved into a catalogue of bacteria, said the mix had been around, albeit in a rare form, for a decade.

What is different from the 2001 version, it added, is a range of genes which make it resistant to members of a broad class of antibiotics called beta-lactams.

The germ was resistant to all penicillins and cephalosporins, but susceptible to carbapenems.

This blending of traits could explain the exceptional virulence of the strain and suggests beta-lactams may have inadvertently made things worse by wiping out rivals to the germ, says the study.

Nearly a quarter of those infected in the outbreak have developed haemolytic uraemic syndrome (HUS), which includes kidney impairment, a breakdown of red blood cells and lack of blood-clotting components called platelets.

“The enhanced adherence of this strain to intestinal epithelial cells might facilitate systemic absorption of Shiga toxin and could explain the high frequency of progression to HUS,” the study suggested.

As of June 20, there had been 39 recorded deaths from the infection, as well as 810 cases of HUS and 2,684 non-HUS cases, entailing bloody diarrhoea, the paper said.

By comparison, most people with just EHEC infection recover completely, and usually fewer than 10 percent of them develop serious complications such as HUS.

Karch’s team analysed the DNA from stool samples found in 80 patients with HUS that were submitted to the lab in Münster between May 23 and June 2.

All of these samples were “clones,” or copies, of the HUSEC041, an E. coli strain identified in 2001 in a child with HUS.