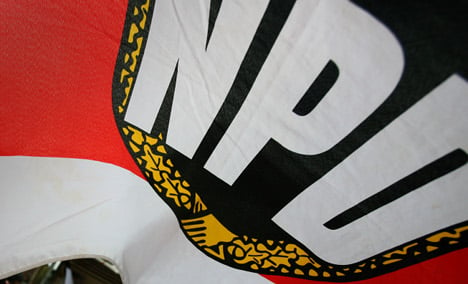 Although there are no definitive numbers, up to one-fifth of participants in the far-right scene are female, said Andrea Röpke, who recently released the book Mädelsache! (Girl Thing!) on the topic.

Röpke said women were valued because they provide stability and a sense of calm to an often violent and virulently xenophobic scene. Often they play the role of organizing less threatening events such as football tournaments of children’s parties.

In politics they often try to project a sense of reasonableness by concentrating on social or green issues.

“The women stabilize the scene in the background,” she said. “They call themselves the ‘community anchor.’”

But though women play a valuable role, it doesn’t mean they seen as equal with men. In fact, the opposite is often true and women must hold their tongues in order to be accepted.

Occasionally gender-related spats explode into the public light, such as in 2009 when party officials voted to censure prominent member Gitta Schüßler who had founded a right-wing women’s organization but subsequently criticized the neo-Nazi party the NPD as a “sect of men.” The party accused her of spouting overly feminist views although she now appears to be a valued member again.

The rise of women is probably best seen, however, in groups such as Exit, an organization which helps neo-Nazis to escape from their former lives and integrate into normal German society. Up to 20 percent of the active neo-Nazis the group helps are female. But women have a special challenge: They’re often delegated to taking care of children and other vulnerable family members and are reluctant to leave.

That doesn’t mean they don’t want to find new lives, however.

“In the last ten years we have increasingly seen women who want to get out,” said Bernd Wagner, the organization’s director, who suggested there might be a need for special social programmes directed at neo-Nazi women.