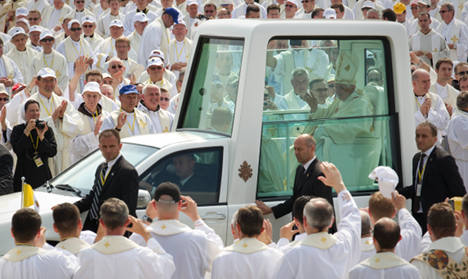 The weekly business paper Wirtschaftswoche predicted that it should be ready for Benedict’s visit to his native Germany in September, though a Vatican spokesman played down that prospect.

According to the report, the new Popemobile will be based on the four wheel drive M Class Mercedes with a hybrid electric-petrol motor.

The rechargeable lithium-ion battery will allow it to drive 30 kilometres (16 miles) without any polluting emissions.

The pope would not be allowed to use a purely electric-driven car as the Popemobile must have the capacity to take off swiftly in case of emergency, the paper said.

A Mercedes-Benz spokesman said the group could give no details on private clients “for reasons of confidentiality.”

Mercedes has provided the special cars to successive popes since the 1980s, the special high-sized, reinforced glass design allowing for maximum viewing with high levels of security.

Last December, Cardinal Giovanni Lajolo, president of the governorate of Vatican City State, suggested Pope Benedict was “prepared to use an electric Popemobile,” as long as it was efficient and reliable.

Benedict XVI, sometimes labelled “the green pope” in the Italian press, has emphasised the defence of “God’s works” and therefore the need to protect the environment.

Vatican spokesman Federico Lombardi told AFP Saturday that while the project for new car was under development it was not yet finalized and the vehicle would not be ready before the end of the year.