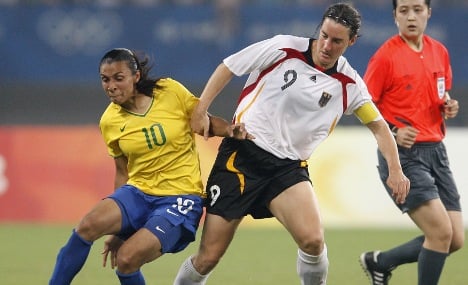 The rundown helps distinguish between the good teams, the average, and those just happy to be included in the tournament.

A heady blend of youth and experience has the two-time defending champions poised for another run at the trophy. The Germans are led by the three-time FIFA World Player of the Year, prolific striker Birgit Prinz, and anchored by Nadine Angerer, a rock of a goalkeeper who did not concede a goal during Germany’s march to the 2007 World Cup title. The only nitpick for the hosts is that, playing in front of a frenetic home crowd, anything less than a third consecutive title will be bitter disappointment.

The Americans have two World Cup trophies (1991, 1999) along with Olympic golds from Athens 2004 and Beijing 2008. Despite struggling in qualifying, the US still has wealth of attacking talent, from powerful striker Abby Wambach to rising stars Alex Morgan and Amy Rodriguez. The Americans have never finished outside the top three at any World Cup, and have all the tools to win it again this summer.

A Seleção have perhaps the game’s brightest star in Marta, a devastating goalscorer and recipient of five consecutive FIFA World Player of the Year awards. Alongside fellow dynamo Cristiane, Marta leads a side that is rich in talent but lacking in silverware, having failed to collect a trophy in a combined nine attempts at the World Cup finals and the Olympics. This year the Brazilians, the game’s most colourful and creative side, will seek to finally affirm their legacy with a title.

Norway’s star has faded somewhat since winning the World Cup in 1995 and Olympic gold in 2000, but balance and experience make the Norwegians a perpetual threat. Norway cruised through qualification, winning seven of eight matches. Patience and clever ball movement make this a tricky team to defend.

Perennially underachieving Japan will look to use a quick and technical attack to dissect opposing defences, led by playmaker Homare Sawa, now in her fifth World Cup. An impressive front line that includes dynamic Duisburg striker Kozue Ando and teenage phenom Mana Iwabuchi has Japan thinking big, hoping the ghosts of past failures are not too much to overcome.

Sweden came tantalizingly close to winning the 2003 World Cup final, where it lost to Germany on a golden goal. But the old guard is gone and a new generation, led by midfield captain Caroline Seger, now hopes to avenge that loss and an embarrassing group-stage exit at the 2007 tournament. A 17-0 demolition of Azerbaijan in qualifying is a testament to the hunger and firepower this precocious Swedish side have shown.

Despite lacking a rich female football culture, England look strong after completing qualification without a loss. Veteran striker Kelly Smith, with nearly a hundred caps to her name, still looks sprightly while rangy midfielder Fara Williams continues to create opportunities to score, and England are widely considered a team on the rise.

This team thrilled in qualifying, scoring a total of 53 goals and conceding just two, but a lack of big-game experience has kept France under the radar of most observers. A stout defence supports a creative attack led by midfielders Camille Abily and Louisa Necib, and in just their second appearance at a Women’s World Cup, Les Bleus are primed to make a splash.

Legendary discipline, a rich football heritage and the leadership of coach Kim Kwang Min makes North Korea a team to be reckoned with. Consistency is this team’s calling card, and midfielders Jo Yun-Mi and Kim Kyong Hwa will help make this steady if unspectacular squad a tough out in Germany this summer.

The Canucks have advanced past the group stage only once in four appearances at the Women’s World Cup. But many are high on Canada after a qualifying phase saw them allow no goals in five matches. Goalkeeper Karina LeBlanc and the defence has already proven itself, and it will the be the offence, led by forward Christine Sinclair, that needs to produce for Canada to make a run at the title.

The Matildas are a boom-or-bust bunch, with an attack predicated on the blazing speed of strike partners Lisa De Vanna and Sarah Walsh. After a breakthrough performance at the 2007 tournament and winning its first Asian Cup in 2010, Australia ’s ceiling is high. But a history of previous failures on the world stage make this group hard to figure out.

Nigeria is a regional football factory, having won six of seven total African Women’s Championships, but the Super Eagles have yet to find success on the world stage. Veteran goal-getters Stella Mbachu and Perpetua Nkwocha give Nigeria a fighting chance, but it will be difficult to advance from Group A, which also includes Germany, Canada and France.

After breezing through qualifying in a weak Oceana region, Kiwi confidence is at an all time high. The World Cup is another level of play, however, and New Zealand seems happy just to have qualified. Midfield captain Hayley Moorwood will need to keep her teammates motivated to avoid an early exit.

Las Tricolores used a rousing triumph over archrivals USA to directly qualify for the Women’s World Cup for the first time, but a lack of support for veteran striker Maribel Dominguez’s waning skills could doom Mexico in a tough Group B.

The Nzalang Nacional’s main advantage is freedom from the burden of expectations. This scrappy side hangs its hat on an African Women’s Championships title over Nigeria in 2008, but lacks the attacking prowess to pose a credible threat.

In their first appearance at a Women’s World Cup, the Cafeteras, led by 17-year-old midfielder Yorely Rincon, have nowhere to go but up. Colombia is an up-and-coming power in South America, but success on the world stage will probably have to wait.