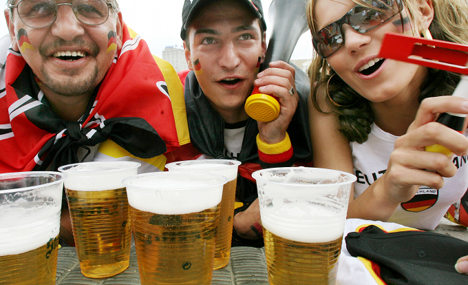 “Consumption must be drastically reduced because it makes the fans completely uninhibited,” Interior Minister Boris Rhein, told Bild newspaper on Monday. “I therefore believe that an alcohol ban in football stadiums and on public transport makes sense.”

Rhein didn’t offer a concrete plan to realize his idea. But it comes just a few months after police reported that German football hooliganism is on the rise – although they did not specify whether the increase was related to alcohol consumption.

Officials reported in April that authorities filed criminal charges against 6,043 fans last year and physical harm was a factor in almost a quarter of the cases. Police also said that the number of “violent, violence-prone or violence-seeking fans has grown to 8,765, an increase of 855 over the previous season.

Authorities have tried in the past to tighten laws against public drinking in Germany – where young people can often be seen walking the streets with bottle in hand.

But attempted bans have generally been challenged legally or ignored altogether.

In his interview with Bild, Rhein also warned against so-called “ultras,” the football super-fans who are often blamed for promoting hooliganism at games.