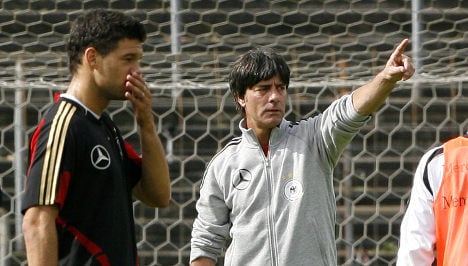 Speaking after a training session at his club Leverkusen on Sunday, Ballack said Löw’s account of the meeting, related on Saturday by German Football Association (DFB) general secretary Wolfgang Niersbach, was untrue.

“I’m disappointed to have to read fresh statements that do not correspond to the truth and to which I have to respond,” Ballack said, according to daily Bild.

The DFB had announced on Thursday that Ballack, a key part of the German team for the best part of a decade, would not play again in the national side.

The former Chelsea and Bayern Munich midfielder, 34, has not played for Germany since March 2010 when he was injured, and in terms of performance at least, his absence has not been felt.

“If the coach was supposed to have told Wolfgang Niersbach he said to me at our conversation on March 30, ‘Micha, that’s it for you and it’s time to give it away,’ or, ‘I’m no longer planning on you,’ then that is completely untrue. The exact opposite was the case.”

Ballack’s account of the meeting in March was that Löw said he regarded Ballack as being “on the right track” to get back in the team and saw him as “a fighter.”

“He encouraged me and told me not to give up.”

Niersbach told Bild: “I wasn’t there at the conversation but the coach has assured me several times that’s how it was.”

On Thursday, Löw himself had made a similar though less specific claim when he said, “I have discussed things openly with Michael Ballack, most recently in our meeting in March 2011 and in numerous phone calls.”

Löw said on Sunday: “I’ve read the statement by Michael and can only say I stand by my statements.”