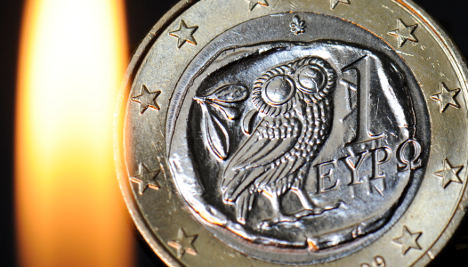 His remarks followed a Sunday meeting of the 17 eurozone finance ministers, who agreed to hold off releasing the next €12 billion tranche of the bailout package until July. They are demanding the troubled Mediterranean nation pass austerity measures through its parliament including the privatization of public assets.

“First, Greece must fulfil the conditions. Then we can decide on a new programme so that the payout of the next instalment is possible,” Schäuble told broadcaster Deutschlandfunk.

If the country wouldn’t or couldn’t carry out the reforms, “this path cannot be taken,” he said.

The clear warning increases the pressure on Greek Prime Minister George Papandreou, who is trying to drum up support for his austerity measures to keep the bailout money flowing from the European Union and International Monetary Fund despite being besieged by public protests and dissent in his own party.

Schäuble also called on private creditors such as banks and insurance companies to voluntarily accept their share of the burden of a second Greek bailout package that is being negotiated. It was not in their interests for Greece to fall apart, he said.

The finance ministers in Brussels backed a plan for private investors to voluntarily bear some of the cost of the next Greek debt bailout. With the current bailout package no longer expected to be sufficient to keep Greece afloat, a second package, likely to total about €110 billion, the same as the first, is now being negotiated.

Under pressure from France, Germany watered down its original demand that private investors as well as taxpayers bear some of the brunt. The ministers in Brussels supported this compromise, stressing that private participation must be voluntary to avoid any perception that Greece is defaulting on its debt – which could destroy its international credit status.

“We have agreed that there should be a private-creditor participation, which should really be voluntary because we want to avoid any credit default or credit event,” Euro Group president Jean-Claude Juncker told reporters Sunday night, according to business news wire Bloomberg.

“But it also has to be clear that Greece has to bring about a situation where all the expected commitments are taken charge of. We depend very much that all legal processes are approved before the end of this month. Beginning of July we will have to continue to discuss the private creditor participation, which will be voluntary and we will have to check whether Greece has fulfilled all its obligations.

“Voluntary participation has to be voluntary which means that no pressure whatsoever can be exercised on the private sector.”

Germany had wanted a forced participation, which effectively would have amounted to a controlled default by Greece. On Friday, Chancellor Angela Merkel backed down and announced jointly with French President Nicolas Sarkozy support for a voluntary contribution.

The question now is whether enough banks and other large investors can be persuaded to voluntarily accept a so-called “rollover” of the Greek bonds they own, which would typically involve an extension on the term of the bonds or a pledge to buy new, repackaged bonds.

Juncker said another meeting would be held in early July to discuss details of the plan, he said. He also said it was impossible at the moment to predict how great a voluntary contribution would be.

Papandreou faces a confidence vote in the Greek parliament on Tuesday night over his new cabinet, which he appointed to handle the current crisis. Juncker said the finance ministers in Brussels “reminded the Greek government forcefully that by the end of this month they have to work so that we are all convinced that all the commitments they made are fulfilled.”