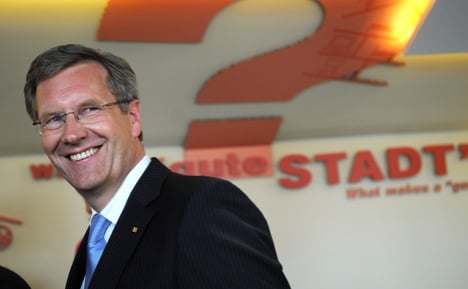 The survey, carried out by polling company Emnid for the Bild am Sonntag newspaper, gave Wulff a mixed report on his first year in office, which will end on June 30.

As many as 83 percent of Germans consider him a good ambassador for the country, and 95 percent think it is good that the president is a relatively young family man. Four out of five Germans also think Bettina Wulff makes a good “First Lady.”

But 80 percent also want to see Wulff take a stronger position on important issues facing Germany today, such as the euro-crisis, nuclear power or the end of conscription. Around 70 percent also said they would like to see Bettina Wulff, a mother of two, speak about family issues.

Ironically, a majority of Germans also disapproved when he did speak his mind on a divisive issue. Some 59 percent said that Wulff should not have said, “Islam is part of Germany” earlier this year, while only 36 percent felt he should have spoken.

Wulff’s reserve has been criticized in the media. The Rheinische Post newspaper called him the “president who disappeared,” while Der Spiegel once headlined an article on Wulff with the phrase “The palace rests silently.”

Some 71 percent of Germans consider the office of president as either “important” or “very important,” even though its power is mainly ceremonial.