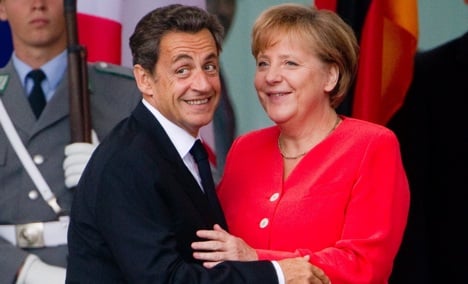 “The idea of a voluntary contribution from the banks is ridiculous,” said Carsten Schneider, financial spokesman for the Social Democratic Party, before adding that the decline of Gemany’s influence in Europe was both breathtaking and frightening.

Sven Giegold, finance spokesman for the Green party in the European parliament, called the entire discussion around private contributions “absurd,” and said that the financial sector was setting the political agenda in Europe.

“We’re having huge problems even making binding agreements,” Giegold said. “Politicians should stop making voluntary deals. Instead, we should be making rules and enforcing them.”

Even the junior partner in Germany’s governing coalition, the Free Democratic Party, was critical of Merkel’s compromise with Sarkozy. FDP deputy leader Volker Wissing said the finance sector could not simply expect the tax-payer to solve all economic problems.

Merkel heads a group of top eurozone economies that had been pressing for private investors to contribute up to a third of the second rescue package by accepting later repayment on their Greek bonds.

But she appeared to back down after the talks with Sarkozy on Friday – amid warnings that Berlin’s terms for the eurozone’s fourth emergency bailout could trigger a potentially disastrous Greek debt default.

FDP finance politician Frank Schäffler told the Frankfurter Rundschau newspaper, “You do have to ask yourself why France gets its way in such important questions and not Germany, the biggest economy in Europe.”

Klaus-Peter Flosbach, finance spokesman for Merkel’s Christian Democratic Union, defended the government. “The coalition agreed only to offer financial aid to Greece if there was a proportionate contribution from private creditors. We will stick to that,” he said. “But private participation can only go so far – it shouldn’t be large enough to cause a more serious crisis in the eurozone.”