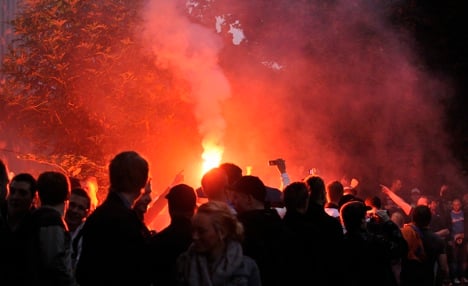 Police said an unknown user sent out invitations to the party through the social networking site, eliciting around 1,500 replies from people saying they would come.

An estimated 800 people were there at its the party’s height.

Police said they decided to intervene when bottles and fireworks began to be thrown from the crowd. One person was taken to hospital during the fight, one police officer was treated for pepper spray injuries, while a total of 41 people were detained, three of whom were charged with bodily harm and breaching the peace.

The incident follows an incident in Hamburg two weeks ago, when a teenager accidentally sent an invitation for her 16th birthday party to the entire Facebook network.

Around 1,400 young people turned up to that event, and police struggled to control the crowd. Eleven people were arrested.

Earlier this week, a German police union said Facebook users who put party invitations online and then have to call the police could be landed with a bill to pay for the law and order.