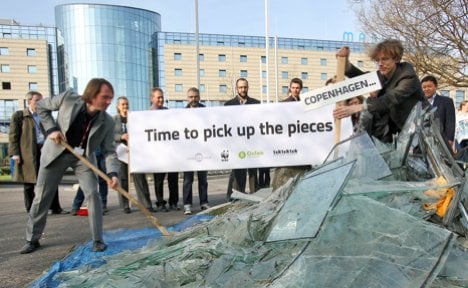 “There is a growing realization that resolving the future of the Kyoto Protocol is an essential task this year and will require high-level political guidance,” said Christiana Figueres, executive secretary of the 194-nation UN Framework Convention on Climate Change (UNFCCC).

“By Durban, governments need to come forward with options that will be acceptable to all parties,” she told journalists, referring to the UNFCCC’s annual gathering, taking place from November 28 to December 9 in the South Africa city.

Kyoto is the only international agreement with binding targets for curbing

greenhouse gases. But its future is uncertain because China and the United States, the world’s two worse emitters, are not subject to its constraints.

A first commitment period covering nearly 40 industrialized countries – except for Washington, which refuses to ratify Kyoto – expires at the end of 2012.

Japan, Canada and Russia have said they will not sign up for a new round of carbon-cutting vows.

The European Union (EU) says it will only do so if other nations – including emerging giants such as China and India, which do not have binding targets – beef up efforts in a parallel negotiating arena.

“It is not enough for the EU to simply sign up for another commitment period,” said Belgium’s Jurgen Lefevere, representing the European Commission.

“We only represent about 11 percent of global emissions. We need a solution for the remaining 89 percent as well.”

Developing countries, though, have insisted the Protocol be renewed in its current form. The Protocol remains critically important because it contains proven market-based mechanisms for CO2 reduction and tools to quantify and monitor

Figueres said the fate of Kyoto was closely linked to progress in the parallel UNFCCC negotiations, which include all nations under the Convention.

These talks made headway in Bonn on technical matters, but remain deeply riven on the core issue of how to share out the task of slashing carbon pollution.

“Governments are realizing that this link needs to be dealt with to get to a global solution, and that will require high-level leadership during the year.”

There will be at least three opportunities for such dialogue between now and late November, she said, including a meeting of heads of state organized by Mexico on the margins of the UN General Assembly in September.

One option discussed being closed doors in Bonn is a “political” deal to extend Kyoto commitments “for one, two, three years,” said Jose Romero, a veteran climate negotiator for Switzerland.

“That gives us some space to look for a solution,” under the other track of the climate talks, he said.

The United States recognizes actions taken by China to slow the growth of its carbon emissions, but said they should be more transparent.

“That’s the conversation that we are currently having with the developing government,” said US negotiator Jonathan Pershing, who said he had met separately in Bonn with both his Chinese and Indian counterparts.

“But we haven’t agreed on that. That is one of the outcomes that we think would be very significant in Durban.” Even if a scaled-down second round of Kyoto commitments – including the EU and a few other small nations – may be acceptable to some developing countries.

“It is better to have that than having nothing at all,” said Grenada’s Dessima Williams, chair of the the 43-nation Alliance of Small Island States (AOSIS).

At the same time, rich nations must “raise their level of ambition,” she told AFP.

Under current trajectories, “we are looking at a 4.0 degree Celsius (9.2 degree Fahrenheit) increase in global average temperatures,” she said.

The figure of 2.0 C (3.6 F) above pre-industrial levels is widely viewed as a safety threshold although many scientists say it is no guarantee of preventing extensive damage to the climate system, inflicting worsening floods, droughts, storms and rising seas.