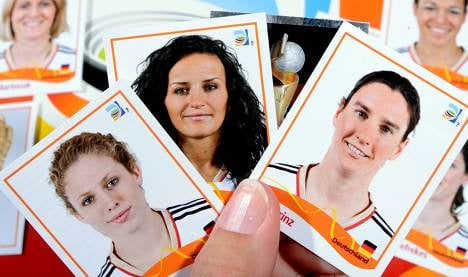 The task of assembling photos and data on the 16 teams in the competition, hosted by Germany and held between June 26 and July 17, proved tougher than expected, Panini Germany spokeswoman Christine Fröhler said.

But the company, headquartered in Italy, said that its gamble on the event had paid off, having already sold 4.5 million packets of stickers to wholesalers. It is even printing one million more to meet strong demand.

“It is a great success,” Fröhler said.

Unlike for men’s competitions, the 40-page official FIFA album, on sale only in Germany for €2 ($2.83), with a pack of five stickers costing €0.60, has no data on how much the players weigh.

Germany is hoping the event will be as successful as the men’s competition in 2006, credited with boosting the country’s image abroad and helping Germans get over a postwar unease about overt displays of national pride.

Some 670,000 tickets or around 75 percent of those on offer have been sold so far, the head of the organisers’ committee, former Germany star Steffi Jones, said in Frankfurt on Thursday.

“I am very happy. The facts show that we are very well prepared,” Jones said. “We are on track to meet our target of selling 80 percent.”

Around 10 percent of the tickets were sold in 50 other countries including Tanzania, Bolivia, Fiji and Lebanon, she said.

The opening match of 32 takes place on June 26 in Berlin’s Olympic Stadium as hosts Germany, hoping for their third successive title, take on Canada.