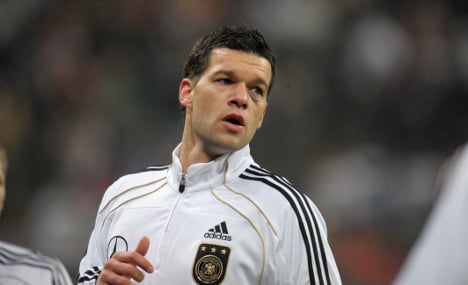 “Michael Ballack will no longer be a part of the German national squad,” the DFB said in a statement.

“I have discussed things openly with Michael Ballack, most recently in our meeting in March 2011 and in numerous phone calls,” coach Joachim Löw said.

“With the Euro 2012 season about to start,” Löw added, “the time has come for me to make a clear statement.”

The former Chelsea and Bayern Munich midfielder, 34, has not played for Germany since March 2010, and in terms of performance at least, his absence has not been felt.

Injured in a brutal tackle by Portsmouth’s Kevin-Prince Boateng in the English Premier League’s FA Cup final, Ballack played no part in the World Cup last year, when Germany played some of the best football of the tournament to finish third.

And in the qualifying campaign for Euro 2012 hosted by Poland and Ukraine, Germany are sitting pretty at the top of their qualifying group with a 10-point lead, virtually assuring a berth in the European championships.

In his place, Bayern Munich defender Philipp Lahm has captained the German side.

“Recent months have shown that lots of young players with promising futures have appeared on the scene,” Löw said. “Since the 2010 World Cup in South Africa the development of the national team has been absolutely positive.”

“Michael Ballack was for a decade a very important leading player in the national side and contributed enormously to the great successes of the team after the 2002 World Cup,” added Löw, coach since 2006.

“He shaped an era and as captain always put himself at the service of the team, as I was able to witness at close quarters at the 2006 World Cup and Euro 2008.”

German media reports had hinted Ballack would play his 99th – and final game – for Germany against Brazil in a friendly in Stuttgart in August.

But Löw’s latest comments suggest Ballack’s career will finish with 98 caps and 42 goals for his country, having made his debut in 1999.

Ballack played for Bayern Munich from 2002 and 2006 before moving to Chelsea for a four-year stint at Stamford Bridge. Last season he returned to Germany to play for Bayer Leverkusen, but fractured his leg in only his third game back.