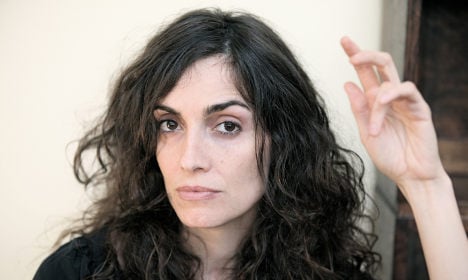 “We have just done two dates supporting Joe Cocker in Germany, and are now heading through Scandinavia with Jeff Beck and it’s going really well,” she said on the phone from Copenhagen.

“They are very big crowds out there, but we are getting a wonderful reception.”

Often put in a musical row with other women singer-song-writers such as Joni Mitchell and Judee Sill, Neema would not necessarily be the first choice to open for such rock giants as Beck and Cocker.

Her music incorporates elements of folk and jazz as well as world music with sometimes a pop feel. Her second album “Watching You Think,” was produced in association with Leonard Cohen and was released last year, yet it has taken until now for her to get to Europe – she had to tour Canada and the US first. Now, finally she has made it across the pond, to support Cocker and Beck – and for one date each, Elton John and Cyndi Lauper.

“We did two dates opening for Joe Cocker in Stuttgart and Mainz and they were huge crowds but it was beautiful, it was a surprise. It almost didn’t feel as if it wasn’t my own crowd, they were very responsive, it was a real blessing.

“With Jeff Beck it is potentially a difficult crowd, I feel the audience is not the same as mine would be, although some are there. I find speaking a bit of the local language is a good idea, something I learned when I was backpacking around Europe before. If you can say a little bit then they can continue listening to the music. I love languages and try to learn something new.”

As a singer who often performs standing alone on stage with just a guitar and her voice, she said it had also been particularly important to have a band behind her on these shows. She has surrounded herself with pedigree musicians such as guitarist Rob Macdonald as well as Howard Bilerman and Tim Kingsbury from Arcade Fire and Tom Mennier who has played with Martha and Rufus Wainwright, making her confident enough to sing for Beck’s audience of music aficionados.

“For the Jeff Beck shows I am grateful for having the band, it really helps, it’s a musician’s crowd, having this excellent group of musicians and this amazing guitarist playing with me makes me feel more comfortable. The crowd can focus on that,” she said.

Neema was born in Canada to Lebanese parents who themselves were brought up in Egypt. She has travelled extensively, including a couple of stints through Europe in the early 1990s. One trip took her through many of the countries she is now on her way through, including Germany, Italy and an unintentional visit to Austria.

“I was on a train going to Munich and unbeknownst to me, the train had split into two in the middle of the night so in the morning I asked the conductor when we were getting to Munich, and he kept replying “When, When” which I did not understand, until I realised we were about to arrive in Vienna,” she said. “I stayed there for a day, it was a beautiful place, although it was a Sunday and everything was closed.”

Neema’s current tour is likely to be more organised as far as the travel is concerned – she is opening for seven Jeff Beck dates including June 16 in Malmo, June 18 in Gothenburg, as well as a slew of dates through June and July in the Czech Republic, Austria, Slovenia and France. She is also fitting in a number of shows where she is headlining the evening, including June 20 in Cologne and June 21 in Hamburg.

The Local has six tickets to give away for each of the Gothenburg, Cologne and Hamburg shows. They will be awarded on a first-come, first-served basis. To get one, send a friendly email to: [email protected]