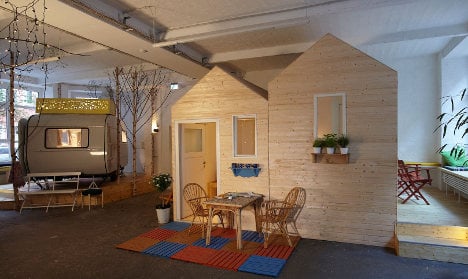 On a quiet leafy street in the trendy Berlin district of Neukölln, tourists are enjoying coffee and home-made cake in a sunny, plant-filled courtyard beside their camp ground.

It’s the perfect spot to relax in a hammock and soak up some rays. But should the weather take a turn for the worse, these visitors won’t get caught in the rain: At the Hüttenpalast, vintage caravans and cosy wooden huts are protected from the elements inside an old vacuum cleaner factory.

The Hüttenpalast, which opened in May, is the latest option for travellers in Germany looking for accommodation that goes beyond the predictable. Like venues that offer the chance to quite literally hit the hay in Bavaria, or sleep in the canopy of an ancient Saxon woodland, it takes advantage the unique character of its locale to offer a quirky take on the camping experience.

Tired of directing visiting friends to accommodation in the more touristy areas of Berlin, the couple decided their corner of the city needed a hotel of its own. In keeping with the German capital’s propensity to reuse old industrial spaces, the duo immediate thought the factory was the perfect setting for their project.

“As soon as we saw it, we fell in love with the backyard,” said Lorenzen, her enchantment with the space clearly undiminished after many months of hard work.

“Actually the plan was to have hotel rooms. But if we just made hotel rooms you wouldn’t see the factory hall any more, so that’s where the concept of having a room inside a room came from.”

Caravans dating back to 1950s were sought out – to be transformed by the talents of their creative friends and neighbours. The most striking is a 1970s East German model, which local designer Yoraco Gonzalez has lined with hundred of sanded wooden blocks, the variegated surface recalling sea-smoothed pebbles and imagined holidays of caravan’s past. Silver birch branches have been installed to surround it with a copse of artificial trees.

The blend of vintage and modern design is proving a hit with guests. “When you see it for the first time, it’s a surprise because you’ve never seen anything like it,” said Luděk Lužný, a member of a Czech dance group staying at the Hüttenpalast recently. “But it’s very comfortable. For a group it’s perfect because you can sit outside your caravan and chat with people.”

If the urban camping experience has a uniquely Berlin flavour, what more fitting way to enjoy Bavaria’s picturesque farmland than sleeping under the stars, amid swaying stalks of wheat?

Click here for a photo gallery of quirky camping options

Farmer’s daughter Monika Fritz came up with the idea for Bett im Kornfeld (Bed in a Cornfield) during a time of financial hardship: “I was sitting in the kitchen thinking about life and about holidays and I thought, what could I do for a holiday that would be cheap, romantic and a little bit adventurous? The song ‘Bett im Kornfeld’ by Jürgen Drews came on the radio and I thought, I have never slept in a cornfield in my life!”

Twelve years later, Fritz continues to make the crooner’s image of bucolic bliss a reality for her guests each summer, at a working farm near the spa town of Bad Kissingen in northern Bavaria. Pitches are carved out of a wheat field for the few weeks in August when the crop is at its golden-hued best, and piled with straw for campers to snuggle up in.

But couples planning a roll in the hay should bear in mind that sleeping in a communal field does not afford much privacy.

“It’s not only to be romantic but also to spend time with other people,” Fritz warns.

“To say, it’s okay to sit with my neighbours in the evening, and even to hear them snore!”

For those seeking an outdoor experience with a little less exposure, the Baumhaushotel, or Tree Fort Hotel, next to the Muskauer Heide forest in Saxony, could be just the thing. Comfortably kitted-out tree houses are set in the Kulturinsel Einsiedel, an amusement park themed around myths of the Turiseder, fictional folk said to have inhabited the area 1,000 years ago.

With labyrinths and 50 metres of underground tunnels to explore, the Kulturinsel clearly has plenty to keep kids entertained. But the staff members insist that there is something here for guests of all ages.

“It’s also great for couples and seniors,” said Kulturinsel’s marketing assistant Christiane Neuberger. “We have some great culinary specialities to enjoy and it’s a lovely place for walks. It’s a lot of fun for people of every generation.”

Staying at an adventure playground may not be everyone’s idea of a grown-up holiday. But like the Hüttenpalast and Bett im Kornfeld, the Baumhaushotel is a flight of imagination executed with passionate dedication and a keen sense of fun.

And what are summer holidays all about, if not an escape from everyday life?