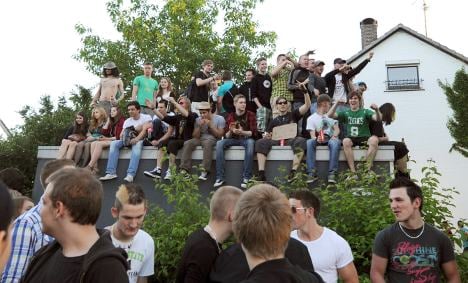 Witthaut warned that such parties could turn into “financial tragedy” for the party-thrower if things get too crazy, even unintentionally.

His words come after a rash of out-of-control parties in Germany where people heard about the events through social networking sites and passed on invitations. Things appear to have been especially bad over the recent long holiday weekend.

Hundreds of young people gathered at a Hamburg lake on Saturday following a note on Facebook, disturbed residents’ sleep and then fought in a massive brawl, Bild newspaper reported.

And, the newspaper reported, 250 Facebook users partied over the weekend in the Munich subway, frightening normal passengers.

But the Facebook-engendered party which rankled police and spurred calls for legislation to deal with the issue, happened earlier this month when about 1,500 people crashed a girl’s 16th birthday party in Hamburg, which she mistakenly listed as a public event on Facebook.

More than 100 police had to be brought in to deal with the revellers, some of whom threw firecrackers and bottles at officers.

Klemens Burzlaff from the DPoIG police union, told Bild that such parties could “threaten human life” because police were diverted from other emergencies to control the situation.