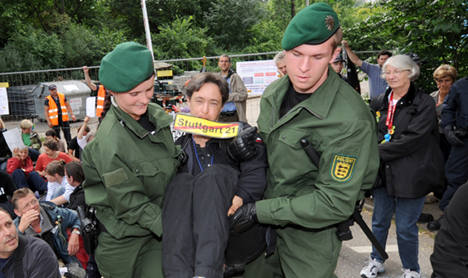 About 130 people tried to prevent building on the site y staging two sit-ins before police ordered them to leave.

Some demonstrators left voluntarily and some had to be forcibly removed, police said.

No severe clashes were reported, although protestors have vowed to continue fighting against the unpopular project.

A two-month building moratorium put in place after a state election in Baden-Württemberg officially ended last Friday after politicians declined to demand an extension.

But opponents mounted massive protests against the project last year, calling it too expensive and unnecessary. In October, more than 100 demonstrators were injured in a violent clash with police.

The demonstration was followed by lengthy talks between state officials, national rail provider Deutsche Bahn and Stuttgart 21 opponents. But officials ultimately decided to go ahead with the project after making a few minor changes to plans.

Some believed the state’s new left-leaning government would more strongly challenge the project because the Greens opposed it before the the election, but they have so far failed to do so.

But state leaders have promised citizens will have the opportunity to vote on the future of the project, probably in the autumn.