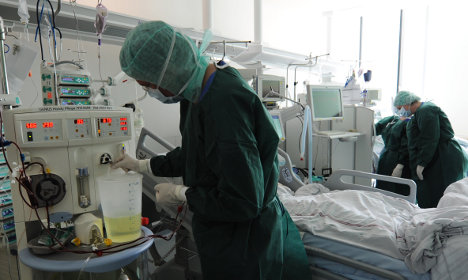 The boy died in the hospital in the northern state of Lower Saxony overnight after becoming infected with enterohaemorrhagic E. coli (EHEC), state authorities said.

Previously the youngest victim from the month-long outbreak, which authorities on Friday blamed on vegetable sprouts from an organic farm in northern Germany, was a 20-year-old woman.

All but one of the fatalities have been in Germany, with the other being a woman in Sweden who had recently returned from Germany. More than 3,000 people have also fallen ill in at least 15 other countries.

Agriculture Minister Ilse Aigner said that between five and ten percent of the three salad vegetables’ crops had been destroyed in Germany.

“About 5,900 tonnes of cucumbers, 1,300 hectares of lettuce and 3,500 tonnes of tomatoes have had to be destroyed,” the minister told Tuesday’s Neue Osnabrücker Zeitung newspaper.

Aigner defended health officials’ advice however. “Protecting consumers from health risks will always take priority over economic interests, even if that causes serious financial setbacks for some businesses,” she told the paper.

The RKI still recommends not eating raw vegetable sprouts. Germany’s Federal Institute for Risk Assessment said on Sunday the outbreak was the most serious of its kind recorded in the world to date.