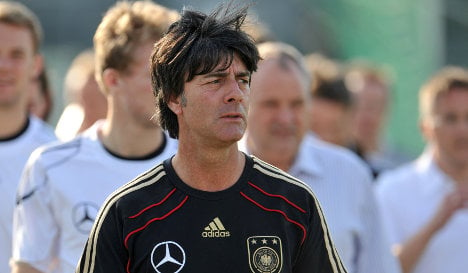 With Euro 2012, to be hosted by the Ukraine and Poland, set to start in Warsaw on June 8 next year, Germany are 10 points clear at the top of their qualifying group and virtually assured a place.

Having finished third at last year’s World Cup in South Africa, Löw, who took charge in 2006, says he will use next season to find the perfect combinations in the build up to next year’s European championships.

“I will use the next six months to try and experiment,” he told the Bild am Sonntag newspaper.

“Of course, there is a proven core of players, but I do think there will be a lot of movement in the national side over the next year.”

Germany can complete their Euro 2012 qualification if they beat Austria in Gelsenkirchen on September 9.

The Germans also plan to play friendlies against the Ukraine, in Kiev on November 11, and Holland, in Hamburg on November 15, which Löw says he will use to test different combinations.

“I am not of the opinion that I need to know my strongest side a full six months before the European championships.

“On the contrary, I will probably use a totally different team against Holland than the one which will start Euro 2012.

“I only know that I need to have decided on my starting side four weeks before the tournament begins.”

Löw has an embarrassment of riches up front in with Mario Gomez scoring at will after 28 goals in 32 league games for Bayern last season, while Miroslav Klose is closing in on Gerd Müller’s all-time record of 68 goals for Germany.

Having spent much of last season on the bench at Bayern, Klose signed for Italian side Lazio last week and Löw praised the 33-year-old’s decision to move, having said he wants all his players to have regular football next season.

“It would not have been easy for Miro to sit on the bench for another season,” said Löw.

“Mario had a strong season at Bayern and with an eye on Euro 2012, it is important that Miroslav plays. It is a positive that he faces a new challenge with a new club and gets regular competitive games.”

With Germany currently playing with a lone striker, Löw has not ruled out the possibility of using both forwards in tandem.

“They are the best strikers Germany has, behind them I see no real alternatives,” said Löw.

“It is in my thoughts that they could even play together in the future and to play in another system.

Löw also said he is willing to look at where new Bayern coach Jupp Heynckes plays Germany captain Philipp Lahm next season before deciding whether his skipper plays on the left or right side of defence in the national side.

“I will be talking with Jupp Heynckes to see in position he plans on using Philipp,” said Löw.

“It is possible that I may base my decision on that.”

Löw said he had no news on when he will meet with former captain Michael Ballack to discuss whether the Bayer Leverkusen midfielder still has a role to play in the national side.