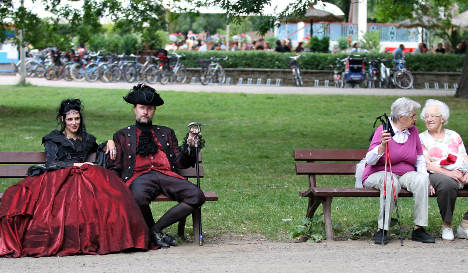 You can’t escape Johann Sebastian Bach on any visit to Leipzig. The composer was the town’s musical director and choirmaster of St Thomas’s Church from 1723 to 1750 and this Whitsun weekend the city is putting on its annual festival dedicated to its most famous son.

This year, however, Bach enthusiasts are sharing the city with very different music fans. Thousands of members of the Goth subculture have descended upon Leipzig for the 20th annual Wave Gotik Treffen (Wave Gothic Meeting).

“The Wave Goth Meeting is a good extension of the Bach festival and vice versa,” argues Detloff Schwerdtfeger, organizer of the Bach event. The two gatherings have only happened on the same weekend once before, he explains, adding that a lot of the Goth fans have also come to listen to the classical concerts.

There are also drawbacks to having the two events at the same time. There is a big shortage of accommodation, says the Wave Goth Meeting spokesman Cornelius Brach.

“The camp site at the festival ground is completely booked out,” he says. Around half of the 20,000 visitors are staying at the venue, situated in the south of the city.

Hotels, restaurants and other businesses get a huge boost from the arrival of the Goths. The Leipzig event is thought to be the biggest gathering of its kind in the world, drawing black-clad music fans from far beyond Germany.

Click here for a photo gallery of the Goths in Leipzig

Hilde Hoogland and Yves Goossens from Belgium have managed to get a room in a hotel in the city centre. Both are long times Goths and this is their fifth time in the city. “We’ve been here since Tuesday and we are staying for a week,” Hilde says.

She wears a long elegant dress of thick red silk while Yves is dressed in an elaborate suit, covered in skulls and crossbones. One half of his face is covered by bronze-colored mask and he wears a top hat covered in plastic skulls. He says he loves the festival for “the music, the atmosphere and the people.”

On Friday, they strolled through the town and took in some of the many outdoor Bach concerts. “A lot of us like listening to classical music,” says Hilde. “You can’t ignore the influence of earlier centuries on our music or our clothes.”

It will be some time before the Goths will be able to enjoy the Bach concerts again. The two festivals don’t coincide for another 20 years.