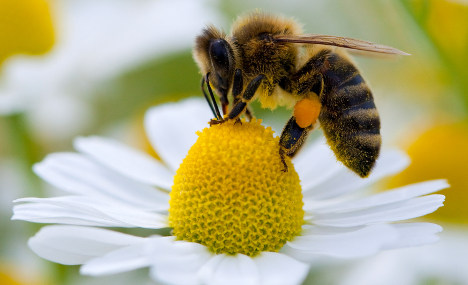 As the first blossoms emerged and nature awoke this spring, one animal was conspicuously absent: the honeybee.

The bees apparently overslept their annual call to action, said bee expert Jürgen Tautz of the University of Würzburg.

“With the change of the climate, we are seeing a growing disparity between temperatures and the first flight activity of bees,” he explained.

Researchers have established that the European spring begins about 2.5 days earlier every 10 years. But this year, the early rise in temperature appears to have left the bees out in the cold.

Raimund Henneken, a doctoral candidate at the Technical University of Munich, is researching how honeybees react to higher spring temperatures.

“That’s why it is useful to observe bee colonies year after year in the spring months,” he added, “so that, later, one can draw conclusions about the behaviour of bees in relation to climate change.”

A project initiated by Henneken dubbed “Climate Bee” focuses on a crucial aspect of bees’ lives: the swarms, which bee colonies use to reproduce.

Bees require several weeks of mild weather before they can swarm. The insects must be physically fit and must have multiplied so much that space in their previous home – a hollow tree trunk or an artificial bee hive, for instance – becomes tight.

When the colony finally disperses on a warm and sunny day, a phenomenon occurs like one Henneken observed in Munich this May, when a thick black mass of bees set its sights on a single flower pot, until a beekeeper came to round them up.

“If they hadn’t been caught, they would have left after two, three days at the latest,” Henneken said.

Then, with the old queen in tow, the swarm searches for a new home. This episode occurs several thousand times in Germany between the months of May and July.

Beekeepers can predict this event when they find so-called “queen cells” in a hive. If beekeepers fail to find these cells, sooner or later a swarm of bees appears in the immediate vicinity.

At this vital moment, Henneken’s research depends on the astute awareness of ordinary citizens.

Using GPS coordinates, the date and weather data from the German Weather Service, Henneken has created a so-called “swarm exchange”, a website and text message notification service that allows bee enthusiasts to report any swarm they happen to spot.

In his own way, Henneken has taken advantage of the “swarm” concept by using the eyes and ears of nature lovers to supplement his research.

“The response has been very good so far,” he said. “More than 1,000 swarms have been reported, especially in Bavaria, Baden-Württemberg and North Rhine-Westphalia.”

Fewer reports have come from regions in eastern Germany or near the coast.

“Especially in rural areas, it is difficult to make beekeepers aware of this project,” he said.

Many beekeepers are seniors without access to mobile phones or the internet. Rural regions also have fewer people to observe and report swarms of bees.

An authoritative evaluation would need reports from areas distributed as evenly as possible across Germany.

“The initial goal is to assess in detail the swarming behaviour of bees,” Henneken said. After several years of research, it will be possible to draw conclusions on the effect of climate change on bees.

But from his current data, Henneken can already establish a strong correlation between temperature and swarm activity.

Tautz considers the project a “great thing”, and expects the research to draw fundamentally new conclusions about the honeybee.

In his research, Henneken has also referenced a study made in the 1970s, in which American researcher Thomas Seeley also attempted to analyze bee swarm behaviour.

But Henneken speculates that his own data, with the benefits of modern media technology, will provide conclusions far more lasting and precise.