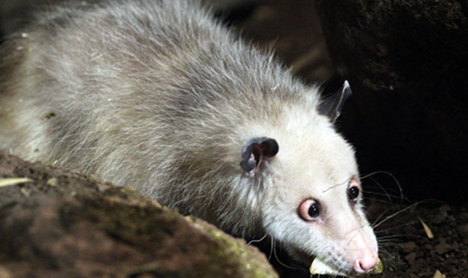 Watched by a scrum of photographers and television cameras, Heidi briefly stuck her snout out of her box on Thurday before being released by her keepers into the €60-million ($90-million), 1.6-hectare (four-acre) “Gondwanaland.”

The marsupial has become an Internet hit, winning some 326,000 admirers on social networking website Facebook, more than three times as many as German Chancellor Angela Merkel.

The zoo hopes Heidi can ride the coat-tails of a Berlin polar bear called Knut, who as a cub became a worldwide media star and money-spinner in 2007, even featuring on the front page of Vanity Fair magazine.

Last year Paul the Octopus achieved nothing short of global fame from his tank in northern Germany for correctly “predicting” the outcome of the nation’s matches in the football World Cup. He too has since died.

Heidi’s eye problem is thought to be due to a poor diet before she was abandoned in the United States, or because she is overweight, leading to fat deposits behind her eyes.

Since arriving at the eastern German zoo around a year ago together with sister Naira and a male called Teddy, Heidi has lost almost a kilo (two pounds) in weight but she remains cross-eyed.

Leipzig Zoo says that it is not planning any “active marketing” of Heidi, and that it would devote any income from third parties that it might earn to projects such as one supporting rhinos in Borneo.

Gondwanaland, which will also be home to around 17,000 exotic plants and some 300 animals including ocelots, crocodiles and Germany’s only Komodo dragon, opens to the public on July 1.